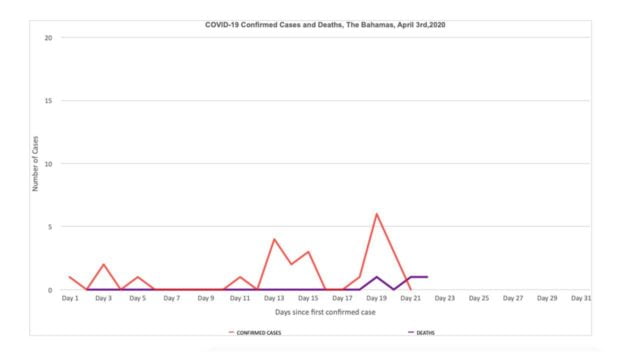 NASSAU, BAHAMAS — Two days after officials confirmed he had tested positive for COVID-19, an 80-year-old man has died in Grand Bahama.

He was confirmed as a positive case on April 2.

When contacted, Deputy Chief Medical Officer Dr Delon Brennen said: “We are investigating the report of a death in Grand Bahama.”

If confirmed, Bartlett’s death would be the fourth COVID-19 related fatality in the country.

The first death was a patient from Bimini, Kim Johnson-Rolle.

Rolle, a mother of three, is the sister of Immigration Minister Elsworth Johnson.

The overnight deaths of two additional COVID-19 patients, a man and woman, were confirmed yesterday.

There have been 24 confirmed cases in the country, 18 cases in New Providence, five cases in Grand Bahama, and one case in Bimini.

Prime Minister Dr Hubert Minnis has ordered a complete shutdown of all services in The Bahamas this weekend under the emergency powers orders to fight local spread.

The complete shutdown order expires at 5am on Monday, at which time the earlier 24-hour curfew and restrictions will remain in effect.

Earlier this morning, national broadcaster ZNS Northern Service reported the island had confirmed its first death due to the virus.

However, the social media post was taken down a short time later.

The original article has been edited to make clear that health officials have not provided official confirmation at this time.