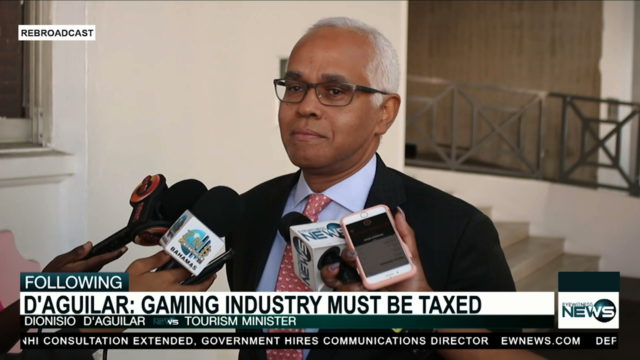 NASSAU, BAHAMAS –  Government has dug its feet into the sand and remains resolute that it will move forward with introducing a tax regime on the gaming industry to ensure that it collects a fair share of its lucrative revenue, according to tourism minister with responsibility for gaming Dionisio D’Aguilar.

D’Aguilar told reporters outside of Cabinet Tuesday that the industry that was regularized in 2014 under the Christie administration is a lucrative one that government believes it must tap into to increase its revenue.

His comments came as government and gaming operators are currently in negotiations over a proposed scaling and patron tax for those who game.

“That was our purpose and intention, obviously the gaming house operators have deployed their legal teams to contest what we have done, but I think our motives were open.”

As discussions with operators and government continue, D’Aguilar said the matter is now in the hands of Attorney General Carl Bethel.

It is expected that the attorney general will bring about an amicable agreement.

The back and forth has been ongoing for approximately six months now.

Gaming operators have argued that while they have no issue with a tax, other “lucrative” industries should be taxed as well to level the playing field.

“Everybody in this country believes that the gaming industry is highly lucrative and feels that the government should have a greater take from it. There’s no doubt of the social costs,” D’Aguilar said,

“There’s no doubt that a significant portion of those that game have not spent their monies wisely; and when they don’t, they turn to the state for assistance. So, it behooves the government to improve its take.”

There has been no concrete date set as to when the government expects to finally roll out its tax regime on the gaming industry.