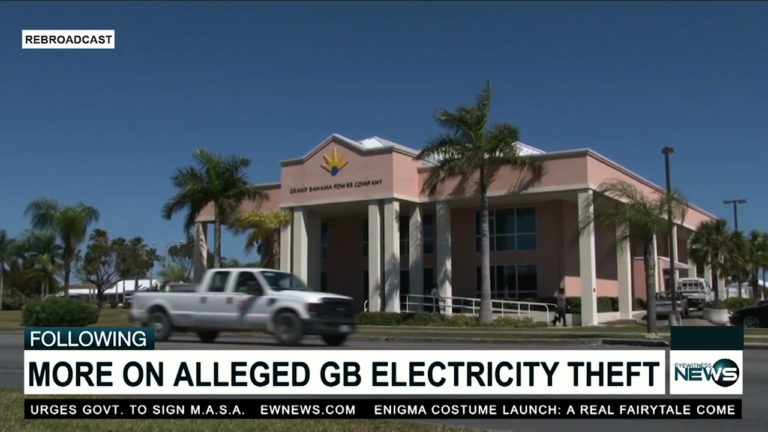 FREEPORT, GRAND BAHAMA – The Cooper family, the owners of Burger King, Kentucky Fried Chicken and the Pollo Tropical franchise in Freeport, Grand Bahama, on Sunday vehemently denied that any of their businesses are stealing generation from Grand Bahama Power.

“The Cooper family is deeply saddened by the latest spate of events concerning our family and the issues involving the alleged theft of electricity from Grand Bahama Power Company.

“Nothing can be further from the truth.

“On behalf of the Cooper family, we wish to emphatically and categorically deny any wrongdoing in this matter,” stressed Dr. Elvis Burrows.

Dr. Burrows, a franchise owner, was one of several persons who spoke on behalf of the Cooper’s at a press conference held Sunday at the Precious Acres Complex on Queen’s Highway.

The three men were arrested last week after an investigation was launched by Grand Bahama Power Company into reports of the alleged theft.

The electricity at these restaurants was disconnected last week Wednesday, leading them to operate on generators for the past five days.

On Sunday, Dr. Burrows explained that the Cooper’ had contracted a licensee with the Grand Bahama Port Authority, who had a certificate of good standing for the installation of an energy saving device that – to the best of his knowledge – is widely used by other businesses on the island.

Dr. Burrows said their family has always operated its businesses with the highest degree of honesty and integrity as these are the core values its businesses are built upon.

He said the family was also very “distressed” following the theft allegations and the actions that followed, which led to many of its fast-food restaurants being disconnected from the power grid.

“Additionally and regrettably, we were also arrested and interrogated by CDU (Central Detective Unit) on this matter. Because of this, we have retained the services of an attorney to represent us in what appears to be a developing criminal matter,” Dr. Burrows said.

“We have given both GB Power and CDU free access to our businesses and have been cooperating fully with them. We are completely innocent in these matters and wish to bring this matter to a conclusion and have the power and our good name restored.

During the question/answer period at yesterday’s conference, the Cooper family representatives were asked if the power-saving device installed at some restaurants was legal. In response, Shurland said his clients were not in a position to state if the device was legal or not.

“As far as they are concerned, they entered into a legitimate contract with a reputable Port Authority licensee and they are not electricians,” Shurland charged.

“So if you want to find out if it is illegal or legal, I think that calls for an investigation which hasn’t been done.”

Shurland also claimed that approval was not needed to use an energy-saving device and maintained that there are others in Grand Bahama who are making use of the same device.

Shurland further alleged that Grand Bahama Power was targeting the Cooper family because they had experienced a decrease in revenue.

“They projected a budget and they saw a decrease in their actual revenues and I can guarantee you that is what brought about the audit, because these [energy-saving] devices have been around for a long time and they just were not making the bottom line, so they decided that they would talk about stealing energy,” Shurland alleged.

Shurland said that he has “evidence” that other stores are using the same energy-saving devices but he was not willing to mention them at yesterday’s press conference.

“The police know who they are,” Shurland claimed.

“The power company knows who they are.

“Not only are other stores using it [but] there are people high in this community who are benefitting from this energy-saving device.”

Yesterday, Dr. Burrows confirmed that his businesses had been using energy-saving devices for several years.

He explained that when his business purchased the energy-saving device, he was told that it would regulate the equipment in the restaurant and it would “produce some cost-saving initiatives when the restaurant is in operation.”

“That is as much as we know. I am not an electrician,” Burrows said.

He did state, however, that he is always looking for ways to reduce power.

“This device was just one of many initiatives that we had embarked upon in addition to LED lighting and investing in new and more energy-efficient equipment.

“So this was just one of many of the other initiatives we were dealing with and so when we heard about it we said well maybe this could help to augment that savings that we are looking for to keep our business going.”

Meanwhile, as of Sunday, the power supply at many of the Cooper-owned restaurants was still off.

Dr. Burrows said unless their power is not restored soon, they would have no other choice but to close its restaurants as they are presently operating on a limited power supply and are using emergency generators.

“I don’t know what would happen to our close to 500 employees that we employ collectively among ourselves, but if our power is not restored soon we just cannot push it anymore,” Dr. Burrows said.

Eyewitness News understands that the licensed contractor who installed the energy-saving devices at businesses throughout Grand Bahama was not arrested because he could not be found.

Meanwhile, a recent statement released by Grand Bahama Power outlined that during the course of recent meter audits early last week, Grand Bahama Power Company uncovered a series of suspected electricity diversions (theft) instances at a number of businesses in the Freeport area.

“As per our established protocols, we have taken immediate steps to isolate those customers from our electrical grid and formally lodged a complaint of suspected theft to the Royal Bahamas Police Force, outlined the statement released from GB Power.

“The RBPF has officially launched an investigation and to our knowledge persons are assisting the police in this matter. At this time it is unclear the number of GBPC customers involved, but there is evidence that other businesses and residential locations are also utilizing this practice and we are working with the RBPF to further assess this matter.”

GBPC said at this time, its primary concern is the serious safety risk these diversions pose to the public, the GBPC employees and the need to regularize these businesses.

The company also urged the public to report any suspected wiring and electrical system irregularities without delay in order for us to address these serious safety issues.