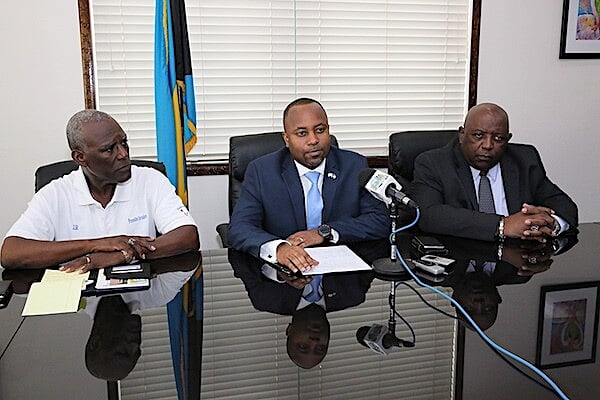 During a press briefing on Wednesday, July 25, Minister of State for Grand Bahama in the Office of the Prime Minister, Senator J. Kwasi Thompson, advised that the problem of mould in the Garnet Levarity Justice Centre will be addressed. Shown from left are: John Frasier, consultant with the Bahamas Public Service Union; Minister of State Thompson; and Harcourt Brown, Permanent Secretary in the Office of the Prime Minister, Grand Bahama. (BIS Photo/Lisa Davis)

The Garnet Levarity Justice Centre will be treated for mold, said Minister of State for Grand Bahama in the Office of the Prime Minister, Senator J. Kwasi Thompson during a press briefing, Wednesday, July 25.

The meeting was attended by Magistrates, a representative from the Industrial Tribunal, a representative of the Bahamas Public Service Union and the Deputy Registrar. It was described as “productive” and the Minister of State said a number of issues were raised concerning the health and safety of employees.

“We are very concerned about the health and safety of all government employees, including those employees at the courthouse. We also want to inform the public that those matters are actively being addressed.”

All Magistrate Courts will be fully operational Thursday, July 26 at 10:00 a.m.

The state minister noted that there has been an on-going situation with mold for some time at the building, and while some work had been done on the building in the past, there is still more needed.

Those at the meetings were also informed of major renovations to be conducted on the building by the Ministry of Works shortly.

Included in the scope of work will be repairs to the roof along with major renovations, which it is believed, will prevent the continuation of the spread of mold.

After initial investigations, it was determined that the Supreme Court side of the building was not as affected as the Magistrates Courts.

When persons are to appear in court for a hearing, they are asked to pay close attention to the notice as to where that particular hearing will be held.

This article was written by ROBYN ADDERLEY, Bahamas Information Services.

Wow, they should a found out about the mold much earlier. Very sad.