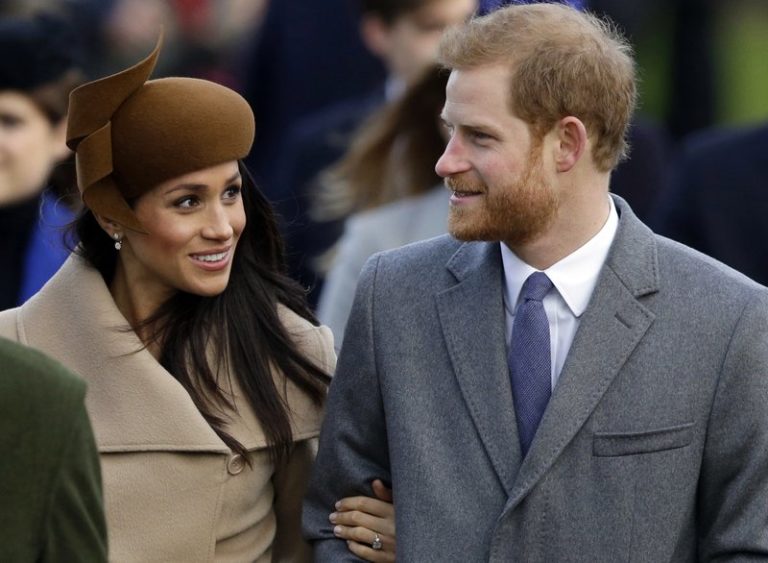 FILE - In this Monday, Dec. 25, 2017 file photo, Britain’s Prince Harry and his fiancee Meghan Markle arrive to attend the traditional Christmas Day service, at St. Mary Magdalene Church in Sandringham, England. Long dismissed as a party boy, Prince Harry has transformed himself in the public eye and enjoys widespread popularity as he prepares to marry Meghan Markle on May 19, 2018. Harry has become a forceful advocate for veterans and won admiration by speaking openly about his struggle with the pain caused by the early death of his mother, Princess Diana.(AP Photo/Alastair Grant, File)

LONDON (AP) — It was a statement that confirmed Prince Harry’s burgeoning maturity and his iron determination to struggle for what he cherishes and believes in.

Ready to fight for his right to lead a semi-normal life in a semi-crazed fishbowl environment. Ready to demand respect for the woman he loved, one he perhaps already hoped to marry.

It was November, 2016, and in a statement released by his press secretary, Harry made clear that he would not let the British press hound Meghan Markle in the way it had pursued his mother, Princess Diana, shortly her death in a Paris car crash in 1997.

His message was clear — back off!

It was also a signal to the British public that he was determined to bring the divorced American actress into the royal fold.

“This is not a game,” the statement read, expressing Harry’s belief that Markle’s safety was threatened by the intrusive press and what he called the “racial undertone” of much of the commentary and the social media trolls.

Harry’s unusual public statement distilled many of the elements that have shaped his life: The pain caused by his mother’s early death; the resentment of the relentless press pursuit that contributed to the breakup of his prior serious relationships; and his determination to find a meaningful public role and build a family of his own.

Harry had been showing signs of becoming slightly lost. Hijinks, including the 2012 “strip billiards” incident in a Las Vegas hotel suite when Harry was photographed nude with a female companion, only added to that perception.

Since then, the 33-year-old prince, who served as a helicopter pilot in Afghanistan, has only grown in stature, tirelessly promoting causes to help military veterans and speaking out candidly about his own emotional issues, calling for an end to the stigma surrounding mental health problems. The public seems charmed by the compassionate man who has emerged from a brittle shell.

He has shown tireless energy in bringing to life the Invictus Games, his concept of an international competition for injured and disabled military men and women.

And Harry has followed in his mother’s footsteps by working extensively with AIDS charities and meeting privately with AIDS sufferers, sometimes during the type of unannounced visits to hospitals that Diana made in an era when the disease carried much more stigma.

Andrew Morton, author of a groundbreaking biography about Diana and a new book about Markle, says the public’s goodwill toward Harry stems in part from the collective memory of Diana’s televised funeral. He says millions around the world were moved to tears by the card the 12-year-old Harry placed on her cortege that said “Mummy.”

“The public indulges Prince Harry, they see him as an exuberant lively young lad, who has very much got the personality of a Spencer, of Diana,” he says, referring to Diana’s origins in the aristocratic Spencer clan. “They watched him walking with his head down behind that funeral cortege — what an awful ordeal for him — and they’ve kind of willed him to find happiness.”

He says Harry began to find his way about a decade ago on a flight back from a combat mission in Afghanistan. The transport plane bringing him home carried the body of a Danish soldier killed in action, and three badly injured British servicemen.

“He realized he had to start using his own position to give some purpose not only to his life but to the institution in which he’s lived all of his life — the monarchy,” said Morton. “That was a transformative moment.”

Harry has not been a stay-at-home royal, at one point trekking to the South Pole with 13 injured service personnel on a Walking with the Wounded charity expedition. He celebrated the achievement with a few whiskies.

Harry is seen as more spontaneous and approachable than his more buttoned-down older brother Prince William, who carries the extra burden of being a likely future king. Harry keeps moving farther down the line of succession every time William and his wife Kate have another child.

The younger brother has not been afraid to air his demons in public. In a first-ever public discussion of his own struggles after his mother’s death, Harry told The Daily Telegraph last year that he had “shut down all his emotions” for nearly 20 years and been “very close to a complete breakdown on numerous occasions.”

He said only by entering therapy at William’s urging was he able to come to grips with his grief about losing his mother at such a young age.

“My way of dealing with it was sticking my head in the sand, refusing to ever think about my mum, because why would that help?” he said of his teens and 20s.

It is a period in which he was sometimes out of control. He said he felt “on the verge of punching someone” at times and had taken up boxing as an outlet for the aggression he felt.

It didn’t help that he was photographed virtually every time he went out in public, a level of scrutiny that helped scare away his first two serious girlfriends, Chelsy Davy and Cressida Bonas.

“We’ve never had such a personal revelation from the royal family before,” said Joe Little, managing editor of Majesty magazine. “The older generation would regard this as a private matter. But Harry did it and he probably won a lot of new friends by being so personal.”

Harry’s goal — shared with William and Kate, who joined the campaign — was to convince others to seek help without shame, and to raise awareness of the need for more extensive treatment of mental health issues.

The response was overwhelmingly positive, with doctors and mental health advocacy groups praising Harry for shedding light on a problem often hidden in the shadows.

And — when he spoke about the grief that poisoned his life for two decades — it reminded many of the crestfallen young boy who walked silently behind his mother’s coffin, and the way he eventually moved beyond his pain.