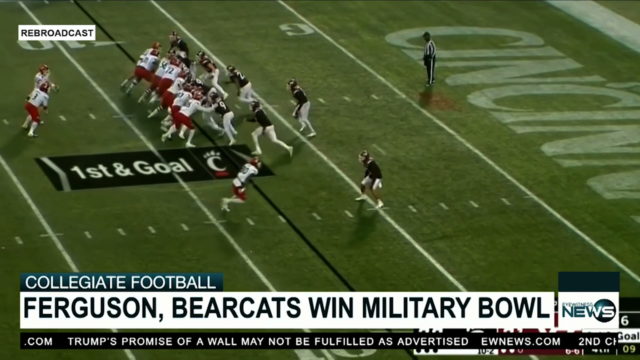 The Bearcats ended Virginia Tech’s run of 25 consecutive winning seasons. Bearcats quarterback Hayden Moore threw for 120 yards in addition to running for a 19-yard score to give Cincinnati its third 11-win season in the school’s history.

Ferguson ended his collegiate season with six rushing yards and one solo tackle. The 6’5”, 303-pound offensive lineman said he’s glad that the Bearcats could represent the Atlantic Coast Conference (ACC) on the big stage.

“The ACC really doesn’t get any respect from the power five conferences. We have so many teams that knock teams from those conferences off. We started the season off beating UCLA. There is also the University of Central Florida Knights who were ranked eighth with a perfect record two years in a row and didn’t get a chance at the football playoffs.”

Ferguson was a former top 40 high school recruit in the state of Florida. Prior to committing to Cincinnati, he played for Orlando Lake Nona.

He chose the Bearcats over scholarship offers from Illinois, Minnesota, South Alabama and Western Kentucky. Bethune-Cookman was also in the mix of suitors, joining several other Football Championship Subdivision (FCS) hopefuls.