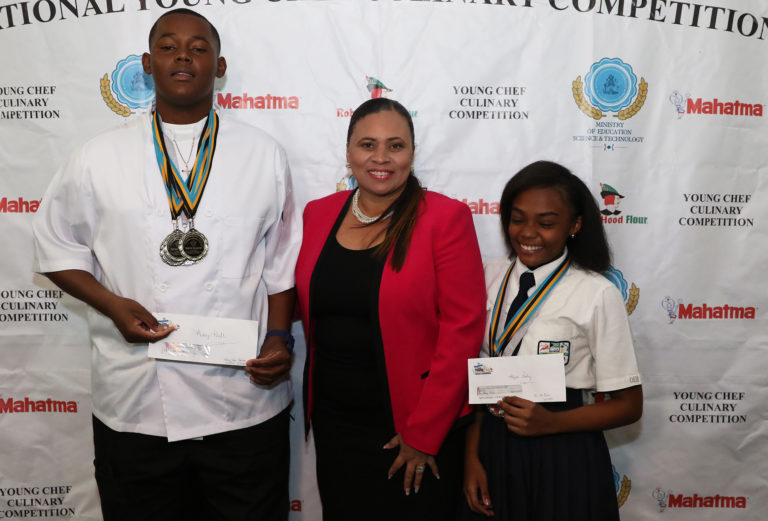 Emotions ran high as was evidenced by streaming tears, broad smiles and unreadable expressions during the award ceremony of the 26th Bahamas Young Culinary Competitions on Friday, as two Eleuthera students took the top spots.

In addition to Eleuthera, schools fielded students from other islands including Acklins, Andros, Cat Island, Bimini, the Berry Islands, Exuma, Grand Bahama, Long Island, San Salvador and New Providence.  The students put their skills into practice and concocted dishes to the theme: “Infusing the Flavours of My Island: Dis We Bahamas.”

Keyshan Bastian, assistant director of education with responsibility for career and technical education, told the students that they are “gifted” and “educated” beyond measure. She urged them to take the knowledge and skills they have acquired to the next level.

“Cause the chefs you have touched bases with to remember you. Whatever you do in life autograph it with excellence,” she said.

Bastian thanked parents for investing in their children and acknowledged the Ministry of Tourism, judges from the Bahamas Culinary Association (BCA), coaches and sponsors for their contributions.

Chef Rolle, who served as a judge, recalled that 26 years ago he represented Freeport in the same competition and he credited the competition to his ability to climb the ranks to his present position of Senior Head Chef at Atlantis.

“This is one of the greatest starts for students,” he said. “Take it by the hand and run with it.”

He urged the students to listen to their coaches and nag their parents not for the latest electronic gadgets, but for a chef knife or a small kitchen appliance.

Tasmaine Coleman, international admissions officer at Johnson and Wales University (JWU), confirmed that the first, second and third winners in the senior culinary competition, will participate in a culinary boot camp during the summer.

She also announced that four to five senior participants in the competition are eligible to apply for four-year scholarships worth up to $15,000 at JWU.