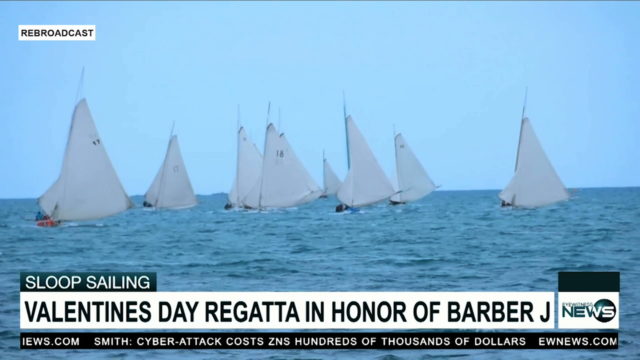 NASSAU, BAHAMAS – Eleazor “Barber J” Johnson, founder of the St. Valentine’s Day “Catch Me if You Can” Regatta, passed away in the hospital on Wednesday morning.

Along with his contributions to the sailing community, Johnson was also a well-known entrepreneur.

“We found out around 1 a.m., and honestly, my phone has not stop ringing yet with people offering their condolences and support for our family,” said Barber J’s son Trevor Johnson.

“My father had a passion for regattas, not only because of the action in the water, but also because it brought families together. That’s what he really wanted more than anything else. For everyone to get along and enjoy the festivities together. So, that’s why we decided to continue the tradition of hosting the regatta.”

Barber J’s family, along with Regatta consultant Rev. Dr. Phillip McPhee, hosted a press conference yesterday to talk about this year’s regatta, which is set for February 16-17 at the Montagu Foreshores.

“We are hoping his legacy will continue through his family. They will definitely have the full support of the country behind them. Barber’s contribution to the construction of the regatta desk was prominent in bringing sloop sailing to where it is today. We celebrate his homegoing. Even though we are sad, this is also a time to highlight the positive contributions of Eleazor Johnson.”

“Barber J can be credited as one of the persons who brought a lot of flair and energy to the sport of sloop sailing,” he said.

“He was among the first boat owners to utilize the media to promote not only his boat his boat, the lady Natalie in particular, but also the various regattas in which he participated. He was famous for laying down challenges to fellow owners and sailors. This led to the formation of the St. Valentine’s Day “Catch Me if you Can” Regatta.

“Mr. Johnson’s contributions included his ability to skillfully attract sponsorship for his boat. He was certainly ahead of his time. His legacy is firmly established and many of his attributes will be seen in the lives of the many young sailors and boat owners who he influenced over the years. On behalf of the entire Ministry of Agriculture and Marine Resources, especially the Regatta desk and on behalf of the government of the Commonwealth of the Bahamas I extend gratitude to the immediate and extended family of Barber J for lending him to us.”

This year’s “Catch Me if you Can” Regatta will be held under the theme “This one is for Barber J”. Also, instead of the “A” class boats catching the Lady in Red Lady Natalie, the “C” Class boats will be given a head start and will try to cross the finish line before they’re caught.