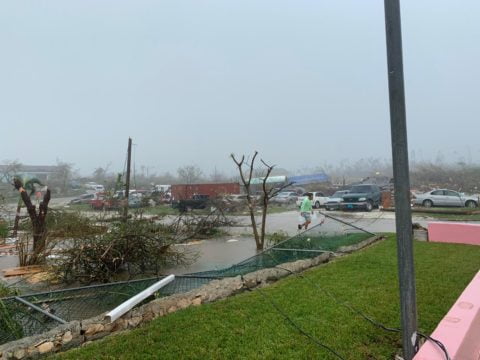 Storm decreasing in strength, but remains a catastrophic Cat. 4

NASSAU, BAHAMAS — While Hurricane Dorian has steadily decreased in strength since yesterday — from a Category 5 storm a Category 4 — Grand Bahama and Abaco will continue to be blasted by the catastrophic system until Tuesday evening.

Prime Minister Dr. Hubert Minnis confirmed the death of five people in Abaco today, though the age and sex of the victims were not released.

“So, you see we still have a lot of way to go before what we call an official all-clear is issued,” Basden said.

“An official all-clear is issued when there is no longer any tropical storm force winds affecting anywhere in The Bahamas, however, due to the sophistication of the equipment we have, we can if desired, prime minister, give certain discontinuation warnings and watches for any particular island. It will be done with great accuracy.”

As of 5 p.m., Dorian was nearly stationery, 25 miles northeast of Freeport, Grand Bahama, with maximum sustained winds of 145 miles per hours.

Basden said while the storm continues to lose strength, hurricane winds extended 45 miles outward from the eye of the storm, while tropical storm force winds extended outward around 150 miles from the center of the system.

The slow path of the storm has caused increased concerns as Freeport and the Abacos continue to be lashed by powerful winds, and storm surges between 18 and 23 feet, forcing families in the attics of the homes to seek shelter.

Others, who roofs ripped off their homes, were exposed to the elements. The emergency contact center was inundated with calls from residents to be rescued, Eyewitness News understands.

Some residents who evacuated to the Maurice Moore Primary School, one of the shelters on the island, reported around 4 p.m. that the building was compromised and they needed to be rescued.

It was unclear if they were assisted as communication was lost with them.

“Right now, even though Dorian is moving rather slowly, most of that energy from the rain band will still be in the northeastern quadrant at least for the other islands and we are expecting for tomorrow very similar conditions as we are experiencing today,” Basden added.

A prayer of hope

“So many of our brothers and sisters at this moment are going through so much and we know Father that you are still with them in spite of where they find themselves at this very moment,” he prayer.

“Lord, we ask that you continue to be with The Bahamas. We know that you are with us. Continue to lead us and guide us and protect us.”

The prime minister said that today was “probably the most sad and worst day of my life”.

How can I find out about people that are safe??