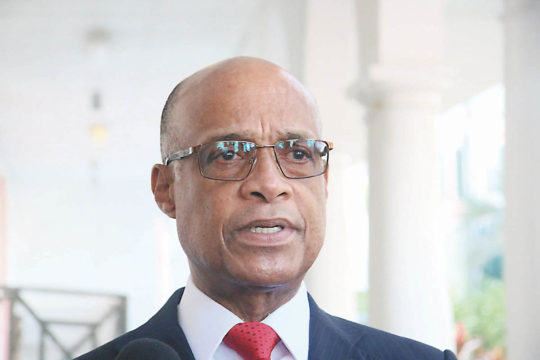 The country’s education chief said he will not accept criticism from the shadow minister on the possible termination of 200 of the ministry’s employees as his only expectation of those workers are for them to perform the work they have been hired to do.

Minister of Education Jeff Lloyd Lloyd told Eyewitness News outside Cabinet, that there are many contract workers in his ministry that do not come to work, and that he will be looking to enforce disciplinary action, which could lead to termination.

The minister was recently criticized by his opposition shadow, Dr. Michael Darville, for his threats of termination.

Dr. Darville however, called it “disturbing” that the education minister would consider termination in a poor economic climate.

However, the minister mentioned a recent training session his ministry held in which over 200 persons failed to show up.

“Let us be very careful about the message that we are sending to the world, that we have endorsed paragons of inefficiency’s and slackness that we have engendered in our people through many decades,” Lloyd said.

“In many incidents they are disrespectful and they are rude they have poor attitudes they are lacking in what we call soft skills. Many of them come to work late.”

Lloyd claimed that those who performed poorly had other jobs.

But Dr. Darville called the intention to discipline those contract workers “callous”.

“I will not accept that criticism,” Lloyd said speaking of Dr. Darville

“If you have a job please do it.

Lloyd said some of the contract workers had terminated contracts as of June 30 of last year and, if there were ill intentions, then those workers would’ve been let go of.

“If we wanted to be unfair we would’ve allowed these people to go home June 30, but they’re still working,” he said.