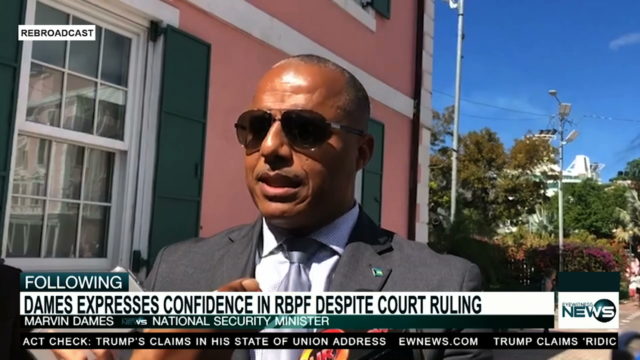 Last Friday, Chief Magistrate Joyann Ferguson-Pratt determined there was no case for Smith to answer and acquitted him of the corruption charges brought against him.

In her ruling, Ferguson-Pratt said the prosecution failed to prove that Smith, the former Public Hospitals Authority chairman, received bribes in the amount of $60,000 from the complainant, Barbara Hanna, between 2016 and 2017.

Dames was asked to respond to aspects of the magistrate’s ruling, in which she decried the “egregious” conduct of the national security minister and Minister of Health Dr. Duane Sands in Smith’s prosecution; and determined that the call logs the prosecution introduced to demonstrate that Smith consistently called Hanna were “manipulated”.

Ferguson-Pratt never asserted who may be responsible for manipulating the call logs.

Speaking to the media outside the House of Assembly, Dames said, “I have every confidence in the Royal Bahamas Police Force when they undertake an investigation that they will do all within their powers under the framework of the law to ensure that justice prevails, whether there is sufficient evidence to proceed or whether there is insufficient evidence; and they do it in consultation with the Department of Public Prosecution.

“I am not an investigator. The commissioner of police is in charge with the day-to-day operations of the force.

“I have every confidence that he and his men and women are doing their utmost best to be fair in the execution of their duties, but to stand here and to level accusations on the Royal Bahamas Police Force, is a disgrace, and it is nonsense.

“I will not continue to go down that road.

“Have you ever heard of a commission of enquiry coming out of a case.

He added, “I’ve been a part of investigations for decades. I’ve given evidence inside and outside of The Bahamas. I am not going to be a part of a spectacle, alright.”

Smith was charged in 2017 with abusing his position as chairman of the Public Hospitals Authority related to the award of a $516,000 contract to Hanna, the owner of Magic Touch Cleaning, to clean the critical care unit of Princess Margaret Hospital.

During the trial, the prosecution produced call logs that showed regular contact by telephone between Smith and Hanna, but defense produced Smith’s billing statements which revealed severe inconsistencies.

The court found that Smith’s phone bill statements were a more reliable indication in assessing who called whom.

“When compared and contrasted, in only five instances were the call logs compatible to the accused billings,” read Ferguson-Pratt’s ruling.

“Mr. Wayden Colebrooke, a witness for the prosecution, supports the authenticity of the bill statement and his evidence is preferred.

“I had satisfied that the bill statements are to be preferred in light of the efforts on the part of Mr. Jenkins, QC, to abandon the call logs and eventually to suggest the incompatibility was due to the mislabeling of the columns: calling number and called number.

“If correct, it leaves unexplained the five instances on the call logs that are correct and undermines the evidence of Smith.

“I am satisfied that it is reasonable to find that the call logs produced were likely manipulated to create the false impression that the accused were persistently calling BH (Barbara Hanna), when in fact, it was the reverse.

“The calls to the accused are at odds with allegation, and the manipulation serves to gravely undermine the prosecution’s case.”

Ultimately, Ferguson-Pratt said there was not a “scintilla of evidence” to support the fact that there was a meeting between Hanna and Smith prior to the award of the contract.

She said the prosecution relied solely on the testimony of Hanna, who repeatedly told the court she felt pressured, used, and gave evidence against her will.

The magistrate also said she found Hanna to be dishonest when it suits her purpose and was often evasive and inherently inconsistent with her answers during cross-examination.

As it relates to Dames, who met with Hanna before she made her official complaint, Ferguson-Pratt said the meeting with the complainant was “unorthodox to say the least”.

Opposition Leader Philip Brave Davis has called on Sands and Dames to resign.

Dames indicated he has no intentions of resigning and said Davis was playing political games.

Yesterday, Dames said cases ought not to be politicized.

He noted that the DPP has appealed the decision of the magistrate.