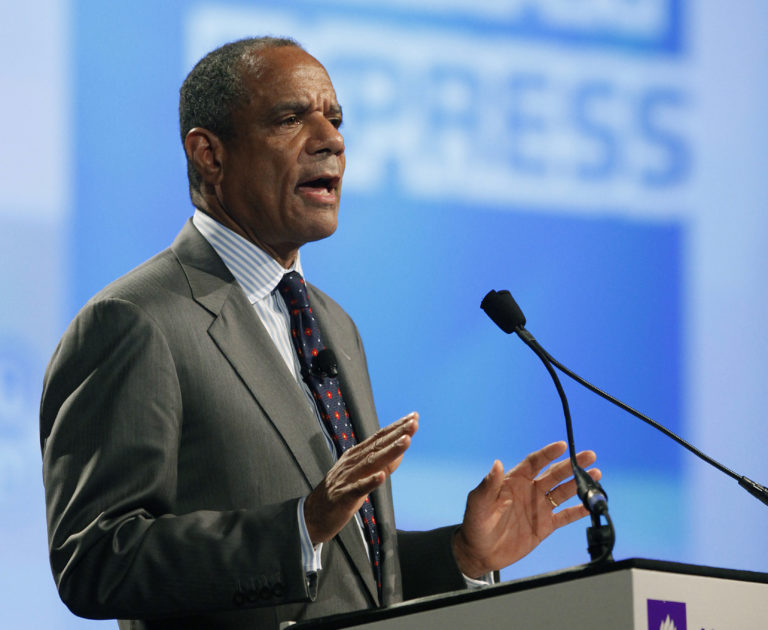 FILE - In this Monday, June 7, 2010, file photo, American Express Chairman and CEO Kenneth Chenault speaks during the New York University International Hospitality Industry Investment Conference in New York. The son of a dentist from New York's Long Island, who grew up as a black man during the height of the Civil Rights Movement, Chenault never expected to be CEO of a major company, let alone work 37 years at the same one. (AP Photo/Mark Lennihan, File)

NEW YORK (AP) — Kenneth Chenault, wearing no sport coat and no tie, with a large cup of tea in front of him, fits an image of a man ready for retirement.

Chenault is days away from stepping down as the chief executive officer and chairman of American Express, the credit card giant and one of the most iconic brands in the country. He will have run American Express for 17 years, guiding the company through the aftermath of the 9/11 attacks, the global financial crisis and numerous challenges to its position as the go-to payment option for the wealthy and well-traveled.

The son of a dentist from Long Island, New York, who grew up as a black man during the height of the Civil Rights Movement, Chenault never expected to be CEO of a major company, let alone work 37 years at the same one.

“I can honestly say I was approached by bigger companies, moments where people would say ‘wow, that’s a great opportunity.’ But this has been my dream job,” Chenault said. He sat down with The Associated Press for his last interview before leaving the company.

Who can blame Chenault, 66, for moving on? His successor as CEO and chairman, Steve Squeri, is well on his way to be trained for the job. Any problems that happened under Chenault’s watch, like the loss of a lucrative Costco partnership, have been neatly cleaned up. Since Chenault became CEO in 2001, American Express’ annual profits have risen from $1.31 billion to an adjusted $5.3 billion, excluding the impact of the new tax law. Sales rose from $17.71 billion to $35.58 billion and the stock has more than doubled and is trading at record highs. That said, AmEx shares did underperform the overall S&P 500 index, but outperformed other banks.

“I hate to see Ken leave. I mean, he’s done a terrific job. His record is really hard to match in corporate America,” said Warren Buffett, the billionaire investor, in an interview with the AP. Buffett’s Berkshire Hathaway is the largest shareholder of American Express, owning 17.5 percent of the company.

Under Chenault, American Express has expanded from its well-to-do and corporate expense account customers into more consumer products. AmEx now markets toward families buying groceries and gasoline an American Express Everyday Card, just as much it markets the Platinum Card toward the jet set who charge six figures a year.

But at the same time, AmEx has faced increased competition while Chenault has been CEO. The company once stood alone in the high-end credit card market. Now there’s the Sapphire Reserve Card by JPMorgan Chase, and Prestige by Citigroup, each with its own points program designed by former AmEx executives. That competition forced AmEx to respond with increased benefits on its premium cards to either keep up with or outsmart its rivals. Last year, AmEx raised the annual fee by $100 to $550, but added new benefits like a $200 a year credit on Uber. The company said it ended 2017 with the most Platinum Card users ever, despite the fee increase.

“Ken and his management team have built a terrific business even through a tough competitive environment,” said Gordon Smith, who runs the consumer banking division at JPMorgan Chase. He used to run the U.S. cards business at AmEx before going off to compete directly with Chenault.

The biggest threat to Chenault’s legacy came not from a competitor, but from a customer: Costco. The warehouse chain and American Express had a business partnership that stretched back to 1999, where Costco would only accept AmEx credit cards. There was also a co-brand credit card program between the two companies.

But that business relationship came to an abrupt halt in 2015, when Costco announced it was changing its credit card payment network to Visa Inc. and that Citigroup would take over the co-brand card. At the time of the announcement, the retailer represented 8 percent of all spending on the American Express payment network and 20 percent of all loans.

“If Chenault had left two years ago, we would be having a different conversation,” said Sanjay Sakhrani, an analyst with Keefe, Bruyette & Woods, who covers American Express.

American Express is both a payment processing company as well as a credit card issuer. Unlike Visa, which acts as a middle man between the bank that issues a debit or credit card and the merchant that accepts it, AmEx operates what it calls a “closed loop” business where it does both.

AmEx makes most of its money off its so-called “discount rate.” While the rate varies from business to business, and industry to industry, typically AmEx charges the merchant a small percentage of each transaction. The company’s average discount rate was 2.41 percent in the fourth quarter last year.

Chenault remained an adamant defender of AmEx’s traditional business model, and urged patience from investors. He also argued at the time that the discount rate that Costco wanted for its new contract with AmEx “didn’t make economic sense.”

To make up for the Costco loss, the company successfully pumped billions into increased marketing to existing Costco card users to get them to switch to new AmEx card before handing over the portfolio to Citigroup. And the company is now trying to grow loans on its own products by allowing customers to carry a balance instead of paying the full amount at the end of the month, as was traditional with AmEx’s charge cards.

“When the Costco deal came along, I’ll bet 90 percent of the analysts on Wall Street were all questioning ‘how can you give up Costco?’ But he was perfectly willing to take some sticks and stones for a couple years and he knew he was doing the right thing,” Buffett said.

American Express still faces threats to its business. It is still typically the most expensive card for merchants to accept and some merchants have concluded they can do without the access to AmEx’s high-spending card members. Its recent choice to expand into lending could put the company more at risk if a deep recession comes again.

Along with increased competition, Chenault faced two other crises under his watch.

Chenault was less than a year into his role as CEO when the September 11th attacks happened.

American Express’s headquarters, located at 200 Vesey Street in Manhattan, was, and still is, directly across the street from the World Trade Center site. The building was heavily damaged and unusable for months. American Express lost 11 employees in the attack.

With no headquarters, American Express had to improvise and move its operations to New Jersey and office parks around New York, Connecticut and New Jersey for months after the attacks.

The 2008 financial crisis also fundamentally changed AmEx. While AmEx never held any toxic mortgages or complicated financial products, it did have a direct exposure to the U.S. consumer through its credit cards. Losses skyrocketed as people and businesses failed to pay their bills. AmEx received $3.4 billion in funds from the $700 billion bank bailout program in late 2008, which it then repaid less than a year later. The company came under more regulatory oversight, and now has to participate in the Federal Reserve’s “stress tests.”

“Whether it was the tragedy of 9/11, the financial crisis, or the reordering of our co-brand partnerships (like Costco), we’ve emerged stronger,” Chenault said.

Chenault is a reserved person. He doesn’t weigh in on big public issues, do interviews often, or carry that big public persona that colleagues like JPMorgan Chase’s Jamie Dimon or Goldman Sachs’ Lloyd Blankfein have. He does have one role that he’s keenly aware of, however. When Chenault became CEO, he was only the third black CEO of a Fortune 500 company ever. And for several years after his appointment, other black men and women were hired as CEOs, at companies such as McDonald’s, Xerox and Merrill Lynch. But that trend has reversed. With Chenault retiring, there will be only three black CEOs at Fortune 500 companies: drug company Pfizer, financial company TIAA and retail chain JCPenney.

“It’s embarrassing. There are thousands of people who are just as qualified or more qualified than I am who deserve this opportunity, but haven’t been given the opportunity. You need a pipeline of people coming in. You need to create an environment where people are embraced and engaged rather than just tolerated.”

Chenault has been well paid for his work at AmEx. He owns 1.26 million shares of American Express, a stake worth more than $120 million, which does not include the options and unvested stock awards he will get when he retires, potentially worth hundreds of millions of dollars. He has used his wealth and position to promote African-American causes as well as education and finding treatments for drug addiction. He is chairman of the Smithsonian’s National Museum of African American History and Culture in Washington, D.C., and helped raise the money needed to complete the building.

Chenault said he’s excited about joining Facebook, particularly at a time when the social media giant’s role in modern culture is under scrutiny. He will be the first black person to join the company’s board.
“I think (Facebook CEO Mark Zuckerberg) recognizes Facebook’s importance in developing communities, but also understands the responsibilities that come with that,” Chenault said. “I’m excited about the opportunity to help him achieve that vision.”
___
Ken Sweet covers banks and financial issues for The Associated Press. Follow him on Twitter at @kensweet.