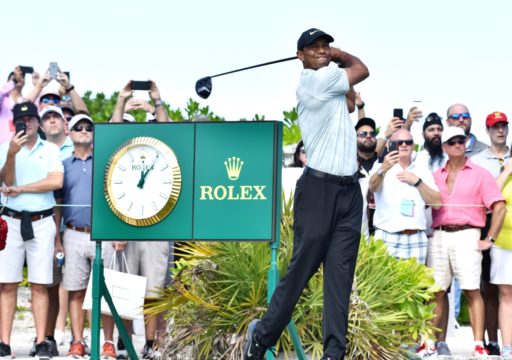 NASSAU, BAHAMAS – At the 2018 Hero World Challenge at Albany on Thursday, avid golfers and fans watched Tiger Woods and Justin Thomas tee off at the exclusive golf event taking place at Albany from Nov. 29 to Dec. 2, for the fourth consecutive year. It is coordinated and promoted by the Bahamas Ministry of Tourism. (BIS Photos/Kemuel Stubbs)

NASSAU, BAHAMAS – The Hero World Challenge kicked off Thursday at the Albany Resort. After the first 18 holes, Patrick Cantlay and Patrick Reed are tied for first at seven under par. Tournament host and five-time champion Tiger Woods stands tied for 16th and defending champion Rickie Fowler is tied for 13th.

Cantlay, who is donating $500 for each birdie this week to the California Strong Foundation, made seven on the day and no bogeys for a 7-under 65, including five birdies on his final six holes. As for Reed, he recorded a field-best eight birdies and one bogey to tie Cantlay.

“I was able to close strong, hitting birdies on five of the last six,” Cantlay said.

“I think anytime you can play against the best players in the world, and this field’s obviously small but it’s really, really strong, it’s good to test yourself against them. I think it makes you a better golfer.”

Reed said: “I went out there and did what I had to do. Coming into the day I felt like I was hitting the ball pretty solid. To kind of putt the way like I felt I did today as well as hit the ball and flight the ball how I want to was very positive, because that was the biggest thing for today.”

As for Woods, he birdied two of his final four holes and moved to three over par after a triple bogey six at hole 12.

“I didn’t quite feel comfortable with my game today, even though I drove it great,” Woods said.

“It was definitely reflective of my scoring today. I didn’t quite feel comfortable and just didn’t quite hit the ball close enough or give myself a lot of looks at it.”

The second round of competition begins today at 11:15 a.m. Woods and Hideki Matsuyama, from Japan, will be first out of the gate, followed by Americans Rickie Fowler and Xander Schauffele.