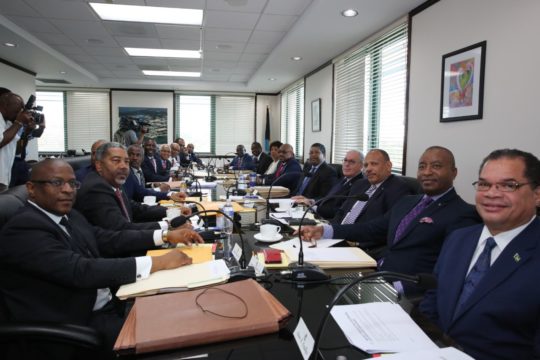 NASSAU, BAHAMAS – The Cabinet, led by Prime Minister Dr. Hubert Minnis (sixth right), is pictured at the start of a Cabinet meeting held Tuesday in the nation’s second city.

Prime Minister Minnis told reporters that several projects were expected to be discussed for Grand Bahama, in terms of economic growth and expansion.

The Cabinet arrived in Freeport on Monday for the information meeting to announce Carnival’s plans for a mega port in East Grand Bahama. The Grand Port is expected to be completed in late 2021, and during the construction phase will employ some 1,000 people.

The prime minister said the Grand Port project will give Bahamians the opportunity for ownership in the tourism and cruise industry.