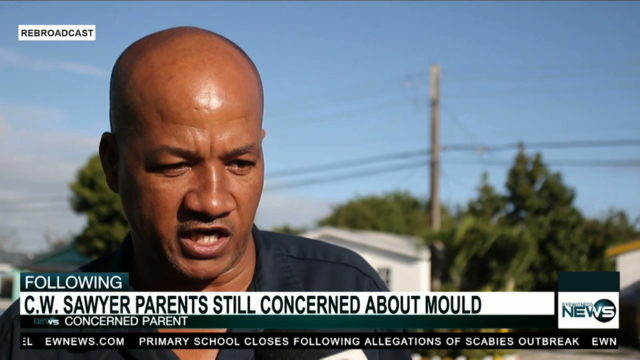 NASSAU, BAHAMAS – While the C.W. Sawyer Primary School reopened on Monday after closing last week due to a reported mould problem, some parents still expressed concern yesterday about the overall safety of their kids.

Parents visited to the school, some without their kids, just to get an update on whether the school had been cleaned or not; while others brought their kids but took them back home because they were not satisfied with the answers that they got from administration as it relates to how the mould issue was addressed.

“I spoke with administration and could not get any answers, so I spoke to my son’s teacher and she said she was only there because she had to be,” a parent claimed.

“There was no letter issued [to parents] but her teacher sent a message… saying that school would go on today and if there were any changes they would contact the parents,” another parent said.

Despite the parents’ concerns, education officials reopened the school yesterday, stating that the mould problem was rectified. However, Bahamas Public Service Union President, Kimsley Ferguson toured the school yesterday and told Eyewitness News Online that there was still more work to be done.

“While the area has been cleaned, which is a band-aid situation as far as I’m concerned, we are going to have some mould growth again,” Ferguson claimed, adding that mould was not the only issue at the school.

“There is a concern about the structural soundness of the school and there is evidence online that this school is one of the schools that need to be replaced, and that recommendation was given from 2015,” Ferguson claimed.

“I would have looked at the belting of the school where water is accessing the inside and damaging the ceiling tiles and so where there is water accessing the area and there is going to be moisture.

“The outside band of the building [also] needs to be replaced and if you find a school that has been condemned you are going to find that there will be structural challenges.”

Meanwhile, Bahamas Union of Teachers (BUT) president Belinda Wilson said she has requested a structural report from engineers at the Ministry of Works regarding C.W. Sawyer, and she hopes to get this very soon.

“The Minister of Works has also agreed to have a meeting with the union and the ministry and the PTA (Parent Teacher Association) so that they will be able to explain to the parents what concerns may be at the school.”

When asked whether he believed parents should bring their kids back to school, Ferguson avoided answering the question but said that he is awaiting on a proper assessment of the school to be completed.

C.W. Sawyer closed for two days last week on the heels of reports that the school was infested with mould.

Teachers were asked to report to the Learning Resources Section of the Ministry of Education until the mould issue was rectified.