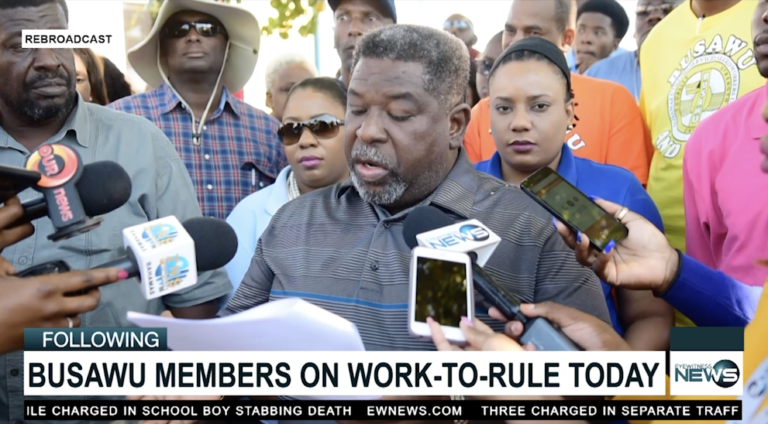 NASSAU, BAHAMAS – Members of the Bahamas Utilities Services and Allied Workers Union (BUSAWU), representing workers at the Water and Sewerage Corporation (WSC), led a work to rule demonstration on Tuesday to air their concerns, mainly claiming that administration at the Corporation was abusing their power.

“The Corporation would like for him to take ownership of the allegation of renting his vehicles from the Corporation’s compound,” Woods alleged.

Eyewitness News Online made several attempts on Tuesday to reach WSC chairman Adrian Gibson for comment, but our efforts were futile.

This latest allegation levied by the union comes on the heels of several issues that were aired  by the union back in February 2019 as it relates to administrative leave, meeting places, rental spaces and accrued vacation. These issues are presently being adjudicated before the Department of Labor and the Supreme Court.

But while these matters are under investigation, Woods noted on Tuesday that fresh issues have come to fruition.

“The union takes exception to the unfair and inconsistent promotional exercises, where friends, family and lovers are being promoted over hardworking individuals,” the union head alleged.

He further alleged that there is a consistent levying of penalties handed down from the Executive Chairman and the General Manager, in an attempt to discipline members.

Woods further claimed that two employees had been placed on suspension and one was suspended for five days because he left his personal vehicle, which had a dead battery, on the compound for the weekend.

Minister of Labour Dion Foulkes, while speaking with reporters before heading to his Cabinet meeting yesterday, said that he was not informed that the union had planned to take action.

Foulkes urged the Corporation to solve its issues sooner rather than later as the operations of WSC are pivotal to Bahamians and their everyday life.

“They [the issues] all seem to be administrative issues. There are no major issues there [at WSC] that cannot be solved, so I’d like to encourage both sides to sit down and have a discussion,” Minister Foulkes said.

Also weighing in on the matter yesterday was the opposition Progressive Liberal Party.

A statement released yesterday from Party outlined that they very concerned about the industrial action taken at WSC.

According to the PLP, the matter must be settled amicably in favour of the workers as soon as possible.

“We have warned the present Chairman Adrian Gibson to curb his  enthusiasm for self-righteous rectitude. As recently as today [Tuesday], the leader of the PLP, Mr. Philip Davis, commented on the arrogance and obstinance of the political directorate of the Corporation,” the PLP said.

“From our vantage point it appears that this is being driven by personal animus toward the President of the line staff union. No matter what the FNM’s majority is in parliament, their members have no right to treat workers disrespectfully.”

The PLP said it has taken note that the position of both the line staff and the management union at WSC is the same.

“They are united,” the PLP claimed. “This means only one thing for the Cabinet. They must have a word with their chairman and ask him to draw back forthwith or be dismissed.”