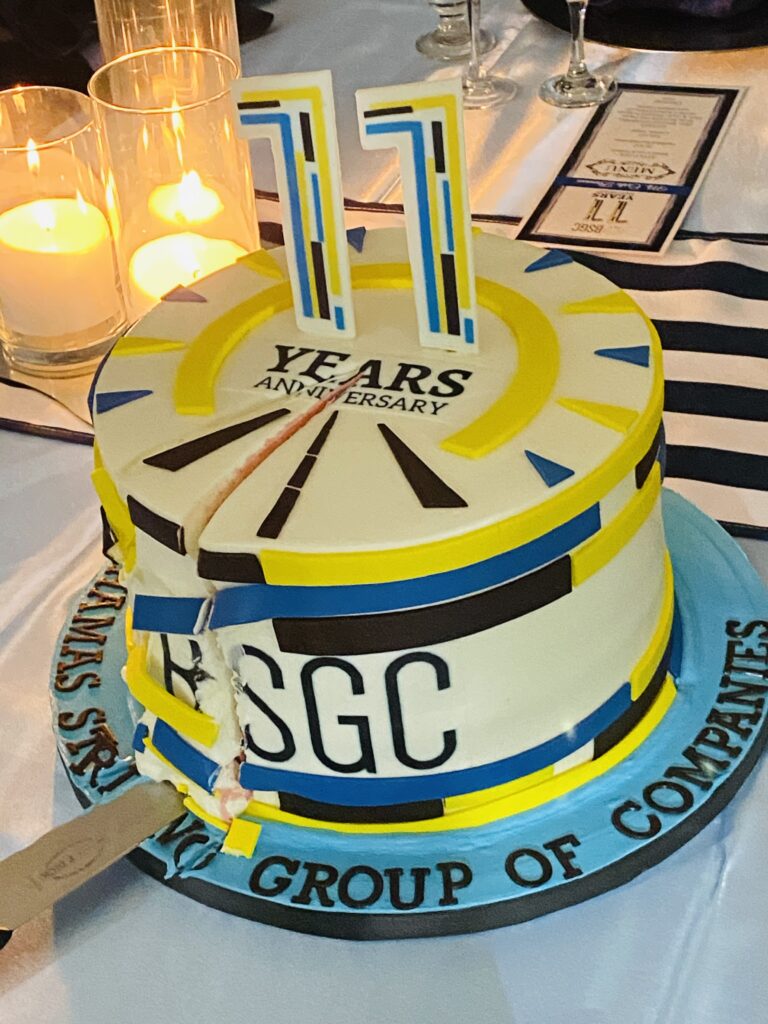 Bahamas Striping Group of Companies celebrated its 11th anniversary in May 2021. (PHOTO: BSGC VIA PRECISION MEDIA)

NASSAU, BAHAMAS — In celebration of its 11th anniversary and to commemorate the 50th birthday of its co-founder, Dominic Sturrup, Bahamas Striping Group of Companies (BSGC) has launched a campaign to give away thousands of dollars in food parcels and grocery story vouchers valued at $25 each.

“The goal is to uplift others and help those who need it the most. The past 11 years has been a rough ride, but it has also been a blessing from God. We have been backed by the Bahamian people and blessed with support from successive governments,” said Sturrup, who, along with company President Atario Mitchell, established the striping business in 2010 with a $5,000 grant from the government.

“The idea was to give back tenfold on the startup funds we received 11 years ago. That figure amounts to $50,000. Half of those funds came personally from me and the other half from the company.”

BSGC Managing Director Allen Albury explained the Family Island giveaway will take place as food parcels distributed via the Rotary Clubs of The Bahamas’ network. On New Providence, grocery store vouchers will be dispersed by BSGC and its civic partners.

Giving back to the community is not new to the company. The business donates thousands of dollars annually through its charitable arm, The Little Dollar That Could, in addition to striping basketball courts throughout The Bahamas free of charge.

During the pandemic, the company gifted the government with masks, gloves and face shields, along with 200 protective suits for the public healthcare system.

“Bahamas Striping has always been and continues to be that company that is totally aware of its corporate social responsibility and one that has demonstrated through its actions its commitment to Rotary ideals and principals and service to The Bahamas’ communities, inclusive of the Family Islands,” said Mario Smith, past assistant governor of Rotary Clubs of The Bahamas who has for years overseen and facilitated charitable distributions between the business and the Bahamian people.

“Over the years, we have seen this demonstrated in their back-to-school initiative, as well as their provision of tablets to students in need, and here through its feeding initiative, which will assist over 2,000 families in The Bahamas.”

Since its founding as a two-man operation, Bahamas Striping has transitioned from striping roads into a group of companies encompassing road building, airport runway, taxiways and aprons construction, as well as parks and commercial property development.

Still, BSGC wants to put its fingers in many pies. In a bid to reach new heights and help The Bahamas feed itself, the company hopes to one day enter an entirely different market: poultry production.

In the meantime, company executives say they are weighing the pros and cons of “going public” through an Initial Public Offering (IPO), which would mark the very first sale of the private company’s stock to the public. According to Sturrup, who serves as BSGC executive chairman, a decision has yet to be made in this regard.

For now, the company is happy to arrive at such a momentous occasion. According to Mitchell, it took time, attention, hard work and reinvesting for Bahamas Striping to generate substantial returns and be recognized as a leader in the industry.

“Looking back from where we started to where we are at now, it feels good knowing we are achieving the goals that we set: expanding the company and seeing positive growth. We’re building our legacy to become major players in road construction and heavy equipment.”

Moving forward, the company’s focus will remain centered upon advancing its corporate vision, according to Albury.

“We are proud to reach this point. This is not just a milestone, but a celebration of what is possible when government empowers local businesses who, in turn, invest in staff, machinery and technical capabilities,” he said.

Thank u for giving back …thank u for being a helping hand to us in need..my name is adline fowler would like some vocher for grocery plz

God bless 🙏 y’all for a job well done and giving back to the people I truly appreciate y’all ❤ and I say thank y’all again, thanks for looking out for the people especially in a time like tis..