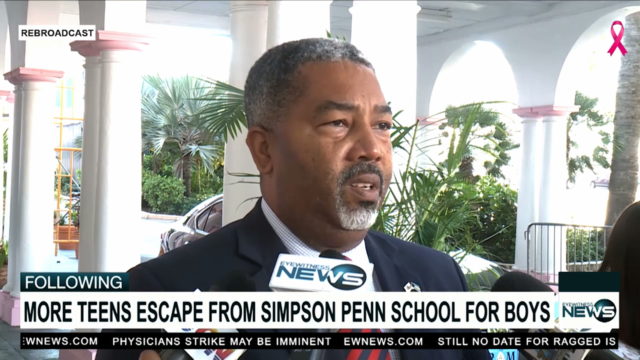 Four escape, one returned by guardian

Just two months short of the last escape from the Simpson Penn School for Boys, another four boys escaped from the facility over the weekend.

Minister of Social Services, Frankie Campbell told the media Tuesday that on Saturday evening, a group of young males were sitting under a pavilion outside watching television when one of the supervisors went to use the restroom. Upon the supervisor’s return, it was discovered that one of the males were missing. A further check revealed that three other boys had also escaped from the Fox Hill Road facility.

The guardian of one of the escapees took him in the following day, but three other juveniles along with the young male that was a part of the first set of escapes back in August are still at large.

Back in August, 13 males escaped through a gaping hole in one of the cottages and Campbell said they had modified the correctional school’s building codes since then.

Campbell said that this recent escape is not related to the previous break-out in August. He assured media that those responsible and involved will be caught and properly dealt with.

Campbell said the Ministry is appealing to the public for assistance to find the escapees.