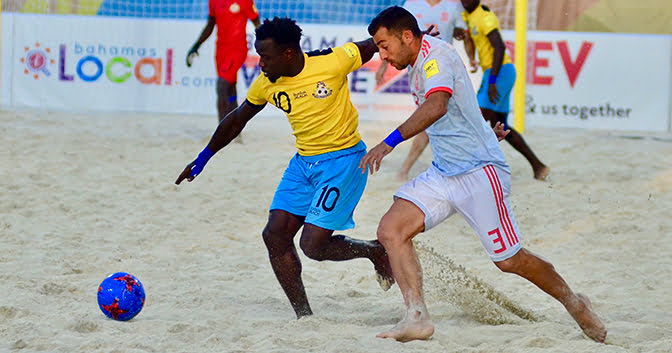 The Bahamas men’s beach soccer team split four games this month at the 2019 CONCACAF Beach Soccer Championships in Mexico.
Despite not advancing to the championship round, several of the teams players and head coach all agree that the team showed signs of growth against the best teams in the world.
They topped Antigua and Barbuda 7-4 in the tournament opener and dominated Bonaire 12-2 in game two.
The team suffered its first loss to the United States (3-2) before ultimately falling 8-4 to El Salvador in an elimination game.
“We had a good showing as a team at this year’s tournament,” said team co-captain Lesly St. Fleur. “It was a really good experience for some of our younger guys to go up against this level of competition. Beach soccer is constantly growing, so, we need to ensure that we’re constantly training and developing talent. A lot of us are getting older and will soon have to turn it over to the younger players and they’ll have to represent us on the international level.”
Nathan Wells, a first time CONCACAF team member, said the experience in Mexico was one to build on.
“It’s always tough when you have to take on some really tough teams, but I’m proud of our effort,” he said. “I would say it was a learning experience, because it let us know what we need to work on as we gear up to begin training again.”