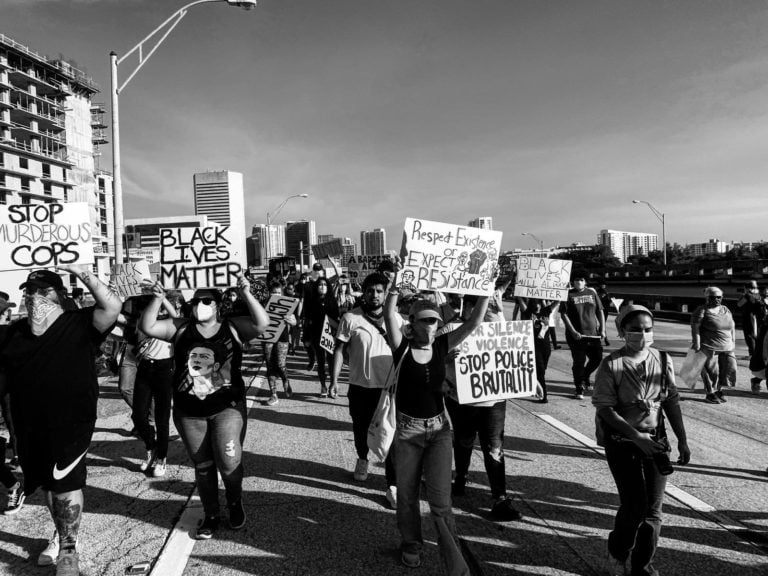 NASSAU, BAHAMAS – While there are no concerns that the rising tensions from days-long protests across the United States will spill over to The Bahamas, some Bahamians are participating on the frontlines.

Protestors in the U.S. continue to rally across the country’s 50 states against systemic racism and police brutality in demonstrations sparked by the death of George Floyd, 46, – an unarmed black man – at the hands of Minneapolis police on May 25, 2020.

An eight-minute and 46-second video of Floyd’s last living moments has been circulated and watched globally, leading to widespread protests in several other countries.

“We are all hoping and praying that they will find a resolution to this and calm heads will prevail at the end of the day.

“What can we say? This is one of those incidents that we all can learn from…and we hope that all of the parts can come together and find a solution.

He continued: “We have our own issues and we are finding ways to resolve those issues every day”.

In the video, Floyd could be heard repeatedly saying “I can’t breathe” while an officer knelt on his neck and three others stood around doing nothing as he asphyxiated.

All four former Minneapolis police officers involved in Floyd’s death have been charged – one with second-degree murder and the other three with aiding and abetting.

Protestors have looted stores, vandalized property, and set dozens of buildings and vehicles on fire.

Nearly half of the U.S. has activated its National Guard and U.S. President Donald Trump has warned of military deployment if the violence isn’t quelled.

Floyd’s death is just the latest incident in a series of killings of black people in the United States at the hands of officers – including Breonna Taylor, Philando Castile, Tamir Rice, and Trayvon Martin. The countless tragedies underscore the treatment of African Americans and the systemic racism they are forced to coexist with.

Barry Williams, a photographer and Ph.D. student at the University of Miami, watched as Downtown Miami burned just one block away from his home on Saturday night.

Williams said he felt compelled to join the protests because the color of his skin makes him just as vulnerable to the same injustices as Floyd and the men and women who came before him.

While he has been living in Miami for nearly three years, Williams noted that he has yet to experience overt racism, however he has encountered several instances of covert racism.

“Thankfully, I haven’t had any encounter with the police but that doesn’t make me feel any safer,” he said.

“And as a black Bahamian – ‘Black’ being the operative word – I realize that I could have that experience like any other black person in this country.

“…I cannot be indifferent or apathetic to the plight of black Americans because I could just very easily be in that same situation, as a Black Bahamian student here in Miami or even just as a black Bahamian here on a shopping trip.”

Williams said he has watched the videos of Floyd’s killing several times and was instantly moved to want to act.

He said when protests began to mobilize over the weekend, as a photographer, and as a black man, he knew he had to go out to be an ally and to document the historic moment.

The Literature major said he attended protests on Sunday and Saturday but describe the latter as an experience unlike anything else.

“It was exhilarating. It was an experience more than anything I could have bargained for or imagined…It is something I will never regret being apart of. I felt like apart of something big, something important.”

Williams said he arrived in Downtown Miami – which is about a block away from his home – around 3 p.m. to what started off as a peaceful protest with a relatively small crowd.

Those numbers, he said, continued to grow almost every half hour until there was a sea of people.

He said during the march, the protestors began to get louder, shouting their frustrations, echoing “No Justice, No Peace” and “I Can’t Breathe”.

He said when the crowd encountered policemen at various points, their fervor increased ten-fold.

He said he knew the demonstration was starting to go left when he watched protestors form a human chain and blocked the I-95.

As the rage grew and the crowd continued to multiply, people started tagging buildings and vandalizing stores, he recalled. At this point, Williams said he knew he could no longer stay.

“Being a student here I don’t want to find myself in the hands of the law. And that can happen easily even if you’re not doing anything. You just have to be at the wrong spot at the wrong moment.”

He noted by the time he got home around 8 p.m. and turned on the news, “Miami was pretty much on fire, in different pockets.”

Williams said he did attempt to venture out again around 10 p.m. that night to go to Bayside Marketplace, but was deterred when he saw footage of the building being looted splashed across the news.

He said tanks were being driven around his neighborhood as law enforcement moved quickly in attempts to control the situation.

“The type of reaction we saw from different cities around the U.S. and around the world shows the discourse and mistrust of law enforcement institutions and how that power is sometimes abused,” Williams added.

“I didn’t feel indifferent. As a black person, I am a part of a global matrix of black oppression. From one place to the next it may play out a bit different but nonetheless, you can’t be asleep to what is happening in the world.”

Over in Georgia, Noelle Rolle, 38,  a practicing rheumatologist, also took to the streets to join protestors in calling for an end to police violence against U.S. black citizens.

Rolle has been living in the United States since 2013 where she has completed a residency, chief residency, and a fellowship.

Despite being a healthcare worker at the frontlines of the COVID-19 pandemic, she explained that she decided that standing up for something she believed in was an essential service.

“There are two pandemics, racism and the virus,” she said, “and we decided at the moment one was more critical than the other.”

Rolle, an avid activist, said while she initially planned to drive to Atlanta on Saturday morning to join the marches there, after seeing news coverage of burning buildings, rioting, and widespread violence, she and a friend decided to join a more peaceful demonstration near Albany, Georgia.

Rolle said protestors held signs and shouted chants like “Black Lives Matter” and “Say No to Police Brutality” as cars passed on the highway honking their horns in support.

She said officers on the scene were united with supporters, handing out water bottles and engaging in dialogue.

She insisted that the demonstrations are not just for African Americans but for all back people.

“…Oftentimes a lot of my white colleagues think I’m a different black. But I’m not going to be the black person thinking that I have it equal because I have it good in a sense.

“Yes, I worked hard for what I have. I make a good living. I have degrees on degrees but I still recognize that there’s injustice and inequality going on because I had to work harder for equal footing than my white counterparts.”

She said while she could not recall any experiences of blatant racism during in time in the country, she’s observed multiple instances of microaggressions and implicit bias in the workplace.

“I didn’t even know what it was because I wasn’t experienced with it,” Rolle said.

“…Bahamians have the privilege of being black and not understanding the consequences when we have the audacity to expect equal treatment.”

She said these and other instances were never acknowledged by those with the ability to do something about it.

“I don’t think as a Bahamian or as a Caribbean person I was equipped to recognize that treatment,” she continued.

“Americans have been taught to put their head downs and turn their cheeks, but I’m not that person”

Rolle expressed that the difference in the black experience with law enforcement in The Bahamas and the U.S. is largely due to the fact that Bahamian officers look like the people they have been charged to serve and protect.

Over 90 percent of the Bahamian population is black.

She added however that this does not mean that racism and injustice do not exist in the archipelago; it has just taken on a different form.

In a statement yesterday, the Ministry of Foreign Affairs advised that it is closely monitoring the protests throughout the United States and is not aware of any Bahamian that may have been harmed.

“Bahamians in the US are advised to follow the laws, act responsibly, avoid altercations, and adhere to the instructions of officials,” it said.

“Moreover, Bahamians in need of assistance are asked to contact the consul office nearest to them.”

Excellent piece. Thank you Sloan for adequately articulating the viewpoint of many.