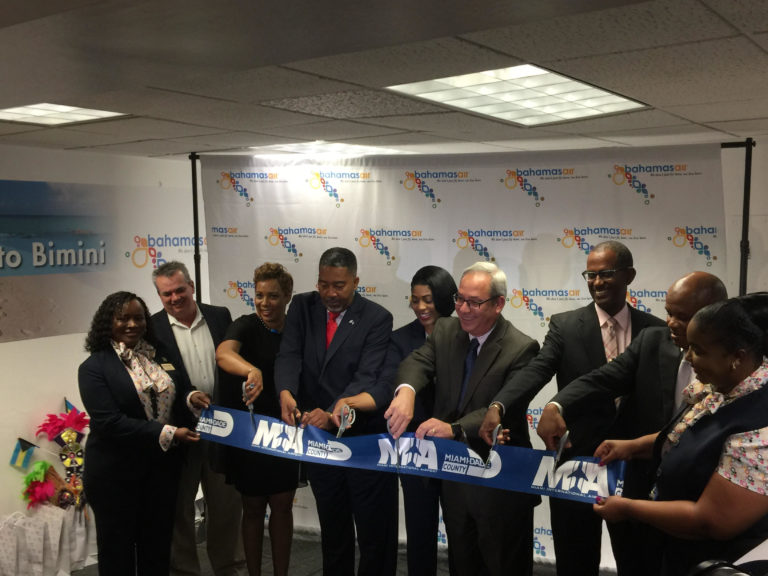 A partnership between Bahamasair and Resorts World Bimini has paved the way for a new direct flight between Miami and Bimini, making it the only Family Island to offer direct flights from the international hub.

Passengers on board included parliamentarians, Bahamasair executives, principles of Resorts World Bimini, along with international and local media.

“This new venture has been a long time in the making and it will now provide a valuable addition to the routes we offer,” said Tommy Turnquest, Bahamasair chairman.

“Miami was the first international destination that this airline serviced and has been doing so since 1973. Bimini is now the only island, outside of Nassau, which provides direct service to and from this hub, and we know that both tourists and Bahamians living in Miami will take advantage of this new service.”

The partnership, between Resorts World Bimini and Bahamasair, guarantees that the resort will fill at least 20 seats per flight.

“We are excited about the service between Miami and Bimini and the response to the new flight service has been tremendous,” said Patricia Lawrence, president of Resorts World Bimini.

“At the moment we have 800 persons already booked to fly here through this new route to stay with us.

“We expect the service not only to benefit our resort, but for every other resort on the island to benefit from it as well.”

“This flight service will not only bring tourists to Resorts World Bimini, but it will also allow them to experience the other boutique hotels that we have on the island. This enables tourists to come directly to our island to experience its beauty and our hospitality,” said Edgecombe.

Minister of Transport and Local Government Frankie Campbell, who is currently the Acting Minister of Tourism said, he is optimistic that the demand between both destinations might spur the national flag carrier to increase flight frequency.

“I think I can safely speak for my colleague (Minister of Tourism and Aviation Dionisio D’Aguliar) by saying that we look forward to this service increasing from four times per week, to a seven-day schedule,” said Campbell.

The direct flight service between Bimini and Miami is now available online at a special introductory rate of $289.00, with four flights per week currently available.