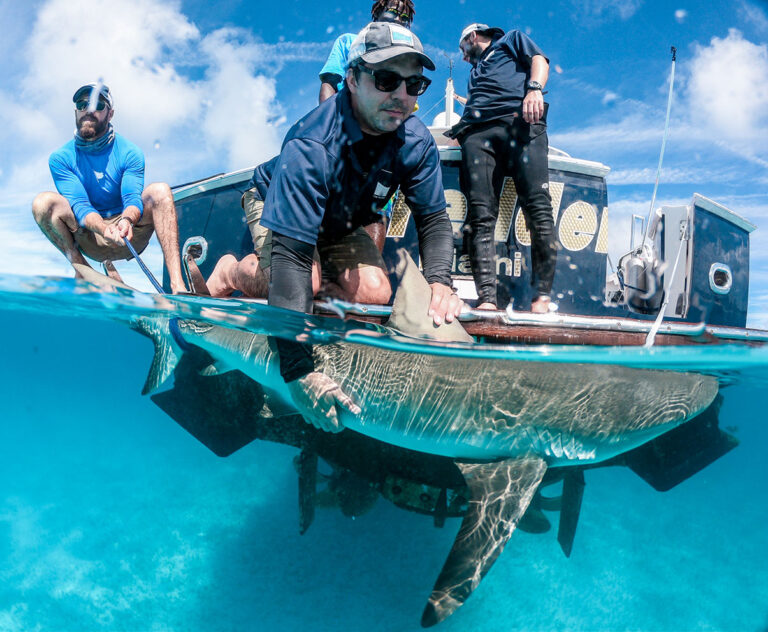 At 35, Gallagher is believed to be the youngest recipient of the prestigious award.

In bestowing the title on him, the popular dive magazine wrote: “Dr Austin Gallagher has shaped global shark conservation for more than a decade.

“His novel 2011 study quantified that sharks are worth more to the Bahamian economy alive as an ecotourism draw than hunted for fins. The Bahamas became a shark sanctuary that same year.”

Gallagher has been exploring the marine resources of The Bahamas for more than a decade. In 2013, he founded the nonprofit Beneath the Waves, and he continues to serve in the dual capacity of CEO and lead scientist as the organization works with Bahamian divers to tag various species of sharks, using electronic monitors to follow them for a 10-year study period.

In 2016, Forbes listed Gallagher as one of the 30 most impactful individuals under the age of 30. The year prior to that recognition, Gallagher led the first multinational expedition to study sharks in Japan.

He holds a PhD in marine biology from the famed Rosenstiel School of Marine and Atmospheric Science and has published more than 80 peer-reviewed articles. He is a National Geographic explorer, a Fulbright scholar and a fellow of the Explorer’s Club.

He also serves on the editorial board of a scientific journal called Endangered Species Research.

“I am honored by the distinction ‘Sea Hero,’” said Gallagher, who was just in The Bahamas for the making of the 2021 Shark Week series.

“But the true heroes are the sharks and the entire eco-system of the incredible waters of The Bahamas and everyone who has ever worked to protect them.”