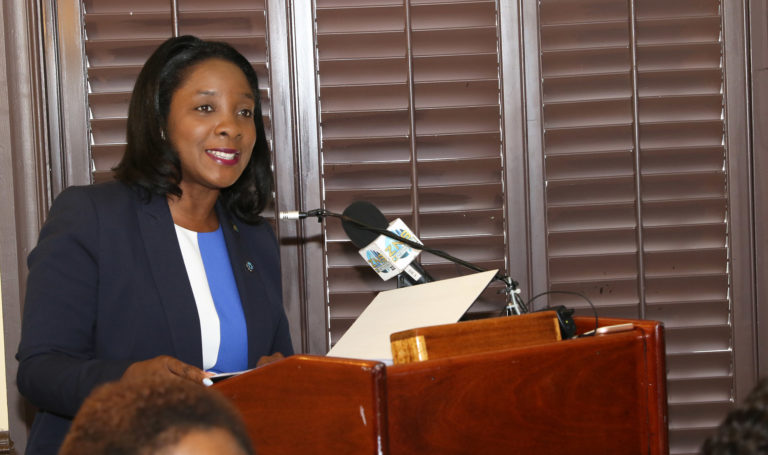 The Bahamas, through the Department of Gender and Family Affairs of the Ministry of Social Services and Urban Development, is diligently preparing to ensure proper representation at the upcoming United Nations (UN) CEDAW (Committee on the Elimination of all forms of Discrimination against Women) Convention, which takes place October 22 to November 9 this year.

“As we report on our country’s progress in the framework of our national strategic plan, I am pleased that The Bahamas is on a pathway to success in the area of social development,” Social Services and Urban Development Minister Lanisha Rolle noted at a recent luncheon.

“The multi-agency CEDAW taskforce led by the Department of Gender and Family Affairs, under the able supervision of First Assistant Secretary Melvelyn Symonette, has worked diligently over many months to ensure the country offers the best representation and reaps fruitful exchange and dialogue with our international partners on issues affecting women and girls, designed to positively impact the lives of every individual.”

Among those present at the luncheon were Patricia Minnis, wife of Prime Minister Dr. Hubert Minnis; Janet Bostwick, Kay Forbes-Smith, president of the Senate; senators, members of parliament, permanent secretaries, representatives of other government agencies and members of the National Women’s Advisory Council.

Rolle related that her visits to the United Nations 52nd Session of the Commission on the Status of Women, and the recently held Women’s Forum of CHOGM, were both “enlightening” and have inspired the ministry’s recommitment towards achieving the international Sustainable Development Goals – in particular the virtues incorporated in Goal 5, to achieve gender equality and empower all women and girls.

“The undertone of both sessions aforementioned encouraged all nations to give concerted effort and attention to the needs of our women and girls, particularly in rural areas,” she said.

She praised Marion Bethel – United Nations CEDAW Committee member, and the first Bahamian selected to sit as an expert on the CEDAW Convention – for her service and expressed hope that the information meeting would inspire agencies, departments, non-governmental organizations (NGOs), and other establishments to partner with the Ministry for other formal sessions.

Bethel gave an extensive overview of the CEDAW Convention.  She said under every human rights convention it is the obligation and responsibility of the state to do certain things, and in this case, it is to advance the human rights of women.

“Once you ratify the convention you have basically agreed to the norms and standards that have been collectively agreed universally by all state parties,” Bethel said.

Bethel explained that the CEDAW Convention is looking for state parties to really show the ‘spirit’ of the convention and make efforts to comply so that when they appear before the convention, they can report progress.  If they have not been in compliance, those states must give reasons.

Bethel told those gathered that The Bahamas has “a duty” to advance the human rights of women and an obligation to put in place laws, institutions and mechanisms to make this happen. She said it is important for NGOs to understand how to use the UN CEDAW Convention, and for all women to hold the state party accountable under the convention.