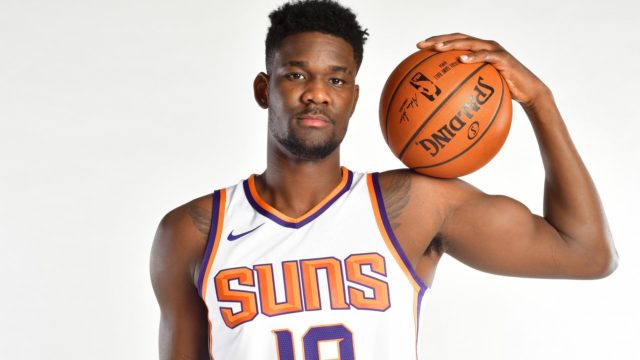 With the start of the National Basketball Association (NBA) season less than a month away, Phoenix Suns rookie Deandre Ayton says he’s spent the summer preparing his body and mind for the grind of the 82-game season.

“At this point, there’s not much talking left to do,” Ayton said this week at the Suns’ media day.

“I haven’t put the ball in the hoop yet, but I’m excited to get on the floor.

“I have been learning about the importance of taking care of your body and learning that you have to watch what you do off the court as well. I’ve also been getting a lot of advice on the proper treatment after practice. Sometimes I still try to skip out on the ice baths, but Tyson (Chandler) is always on me about that, because it’s about protecting your body now and down the line.”

Ayton added that he’s prepared to play whatever style of basketball the coaching staff requires of him, seeing that he’s solely focused on winning.

“Although we’re a young team, I want to win as much games as possible this season and have fun while doing it. My teammates also encourage me to take a leadership approach. They tell me to be confident and speak up, and just to be a general out there on the floor,” he said.

Ayton has garnered respect from his teammates in a short period of time. Several of them praised the 7’1” rookie on media for his versatility and willingness to learn. One of those players is Suns franchise cornerstone Devin Booker, who signed a five-year $158 million contract last season.

His ability to learn, and willingness to learn, are key. He comes in here every day and he doesn’t act like he knows it all. He knows he’s very talented but still open to listening to coaches, listen to Tyson, everything I say, he goes out there and he does it right away,” Booker said.

“Just seeing that already – somebody that’s willing to get better and work hard, it’s very special to see, especially with the talent that he has, the body frame that he has, he’s going to be a very special player in this league.”

Suns fans got a small glimpse of what Ayton can do on the floor during the NBA’s Summer League. Ayton led the team with 14.5 points, 10.5 rebounds and one blocked shot per game while shooting 59.5 per cent from the field.