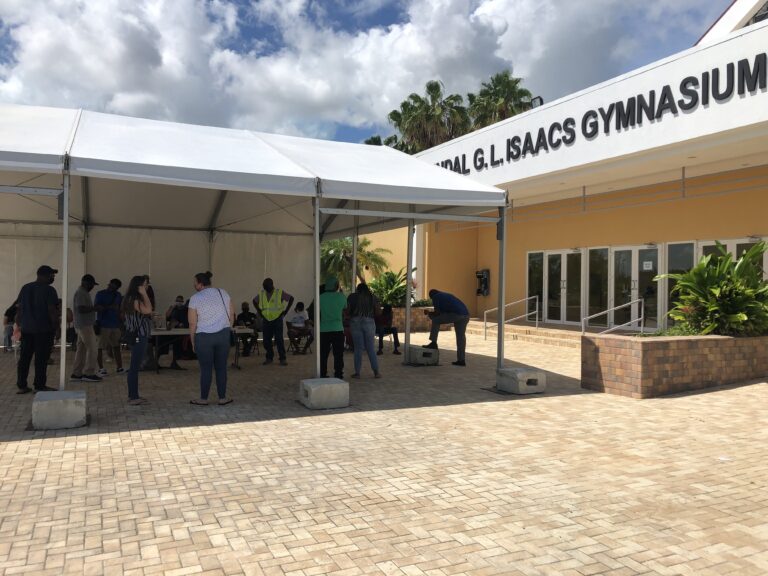 Pfizer roll out to the general public at the Kendal GL Isaacs Gymnasium on Thursday, August 19.

The report warned hat the venue’s usage as a shelter for displaced Dorian survivors and the impact of COVID-19 on sporting events led to a significant drop in revenue.

The Auditor General’s report of the NSA for the period July 1, 2018 to January 31, 2021 was tabled in Parliament yesterday.

The report found there was a decrease in sales for the 2018/2019 period of $57,257 or 29 percent, and $47,017 or 30 percent for the 2019/2020 period. The report noted that the decrease in revenue in 2019 due to the use of the Kendall G L Isaacs Gymnasium as a shelter for individuals displaced by Dorian. Additionally, it noted that the NSA was unable to host many events due to the COVID-19 pandemic.

The Auditor General’s report acknowledged that revenue loss was one of the implications of the gymnasium being designated as a hurricane shelter under the National Emergency Management Agency (NEMA).

It also noted that another implication is that, “The NSA can be faced with the possibility of not being able to maintain the International Basketball (FIBA) certification in order to host international events.”

The Auditor General’s report also noted deficiencies in the NSA’s financial administration, concluding that there were “many failures of the executive management in breach of the Financial Administration and Audit Act 2010, Financial Regulations 1975 and the Sports Authority Act 2011.

One of the report’s recommendations is that the NSA amounts in the aging accounts receivables that are deemed none collectible be written off and a bad debt expense account be created. It was noted that $1,056,328.95 is due to the NSA and is listed on its balance sheet. The build-up of the accounts receivables began during the fiscal period of June 2015.

“It is our understanding that a formal contract for the lease of three spaces was forwarded to the Ministry of Transport. The NSA is presently awaiting a response and subsequent receipts of funds,” the Auditor General’s report noted, stressing that more emphasis be placed on ensuring payments are immediately received for all services.

“The funds were received from the Ministry of Youth, Sports, and Culture. However, an email document from the ministry only indicated that the finds were for repairs without giving specific guidelines. An examination show that the amount of $1,046,091 was transferred out of the operational account on November 25, 2020 to the capital account, a difference of $134,508.74,” the report noted. It further noted that payments totaling $190,212.26  were disbursed from the $1,046,091.26 balance leaving an amount in the capital account of $855,879 from the funds that were received for expenses relating to Hurricane Dorian.

The report recommended that supporting documentation be sent when additional funds are given to the NSA so that it will be better able to track cash flow.

Assessing some eight contract awards to ensure that they were properly negotiated, the Auditor General’s report noted that one vendor had been aware a $168,000 contract and received a 50 percent mobilisation fee on the day of the signing of the contract. A letter from the Attorney General’s Office dated September 23  2019 indicated that the company had breached the contract and had not sufficiently performed to the terms of the agreement.

“It was noted that the company had received an advance of $8,400 to get the project back on track . However, they had not completed the works. At the time of the contract termination, the company had already received an amount of $92,400. Moreover, an assessment of the roof revealed that the value of the works completed was only $84,000, therefore the contractor was overpaid an amount of $8,400,” the report noted.