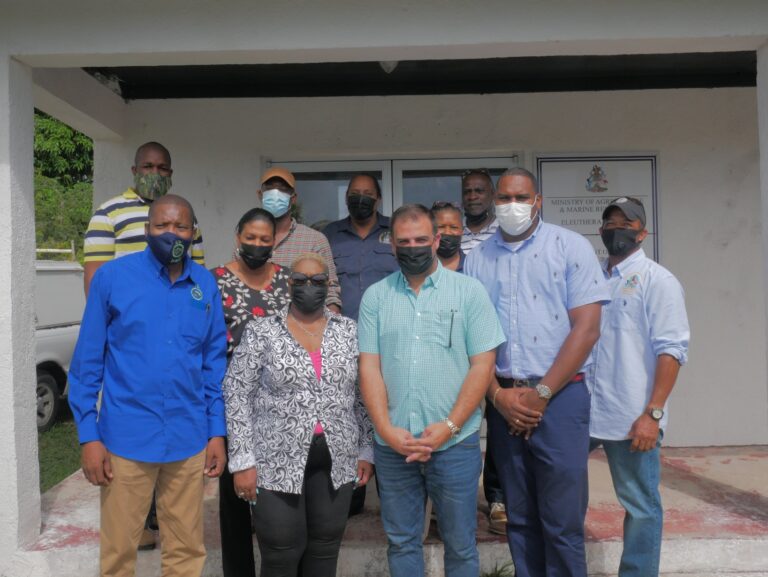 A delegation on Eleuthera in November 2021.

NASSAU, BAHAMAS — Minister of Agriculture, Marine Resources and Family Island Affairs Clay Sweeting said the ministry is looking to revamp Packing Houses throughout The Bahamas to make them more efficient.

“We noticed a lot of minor issues such as a government truck not being licensed and insured and things that can be addressed very quickly. We are also looking at ways to encourage farmers where they are able to sell their products at the Packing House in Green Castle and become more involved. We want to engage them so they realize that they have a friend in the ministry and BAIC,” Sweeting said.

“I wanted both chairmen to realize what potential lies in Eleuthera; what they are able to accomplish and I am excited that they were able to see it too. Immediately, they were filled with excitement and plans to really bring effective change to the satellite offices of BAMSI in the Family Islands.”

There are satellite offices in Long Island, Eleuthera, and other Family Islands.

“The problem that we have is that they really do not have any influence in the communities and they haven’t been invested in. So we are looking at using them and engaging with the farmers, livestock producers as well as using some of our pilot projects in the Family Islands such as poultry farming and finding ways to expand the economy and in order for us to really accomplish this, we must be serious about this,” Minister Sweeting said.

The Hatchet Bay Packing House has been closed over the last four and a half years, according to officials.

It is currently being remodeled and officials expect construction to be completed by December 2021.

The minister said he expects the Packing Houses to have a full complement of staff so that farmers in Central Eleuthera would be able to sell their products.

“While we encourage private sector involvement, we are also mandated to assist farmers where we can. The Packing Houses were meant to be a place where they can get seeds and fertilizer. Without a full complement of Packing Houses and distribution sites throughout this country, the farmers are then left with a sense of not being able to be involved and not being able to get the supplies they need to really be successful,” Sweeting said.

Sweeting said he also wants to create simpler processes between BAMSI and BAIC.

“I am a team player and I think that it is important to keep people involved so that their ideas, along with what the Prime Minister has mandated us to do to become accomplished and that we look at setting goals. I don’t take this job lightly and none of my colleagues do either. That’s why we are excited about what we need to do and I think BAMSI will play an instrumental role and we will work together as a team.”

While in Eleuthera, the delegation also visited local government offices in Rock Sound and Governor’s Harbour.

“We were able to hear their issues, sit and discuss how we can resolve them and ways to really move the community forward and the constituency. They haven’t really seen representatives from the ministry discuss issues at their level. I think that as we move forward and as this ministry involves Family Islands, the persons that feel neglected with Nassau-centric governance, will now realize that this ministry will be very involved, engage persons in the Family Islands and bring resolutions to small issues that have plagued them for generations,”  Sweeting said.