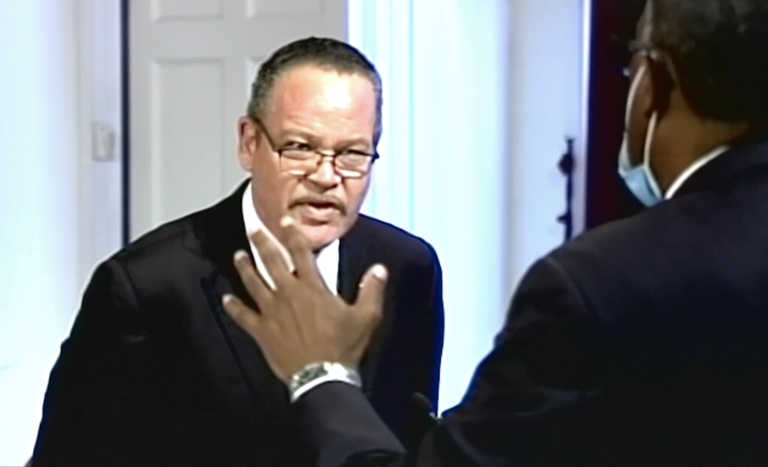 On Thursday, her comments referencing the Deputy Prime Minister and Minister of Finance Peter Turnquest, which was central to the row, was eventually struck from the record.

However when reintroduced in the afternoon session, her remarks caused a second verbal spar.

During her contribution to debate, Coleby-Davis accused the Minnis administration of catering to the rich, and said the budget reflects “gross incompetence, political favoritism and lack of compassion”.

“This is a make-believe budget,” she said.

To the suggestion that the government fired public servants as part of austerity measures, Attorney General Carl Bethel refuted the assertion, and said the government has done all it can to maintain employment in the public service.

He called on the senator to withdraw the comment or prove it — a challenge she accepted.

“Let me say something. You know, it is extremely unfortunate that a speaker in this place would get up and make an aspersion against a government official and not have the wherewithal to justify making that aspersion at the moment they are challenged on it. This is very unparliamentary.

When asked by Senate President Dr Mildred Hall-Watson if she was able and ready to justify her statement, Coleby-Davis said she was not quoting Turnquest, but referring to the austerity measures, including public service firings, undertaken by the Minnis administration, which she said were heralded as accomplishment.

He reiterated the government preserved the public service.

Chiming in, Senator Fred Mitchell, leader of opposition business in the Senate, said Bethel’s statement was false and there was no cause for Coleby-Davis to withdraw her remark.

Bethel condemned the matter as unparliamentary, and discouraged Mitchell from “encouraging your members”.

“Don’t come with that and get on your high horse with nonsense,” Mitchell responded.

Bethel shot back: “Stop twisting the rules to do foolishness”, as Mitchell, with his hands held up, continued: “Not today man.”

Coleby-Davis referenced a May 30, 2018 publication, in which she charged that Turnquest was quoted as saying as a result of a 10 percent budget cut in all government ministries, government wages were decreased by $120 million.

She asked: “Can the AG confirm whether the 10 percent cut included firings at the public office?”

With continued objections from the government side for Coleby-Davis to “prove it”, the senate president requested specific on the firings.

Bethel, who then sought to make clarification relating to Coleby-Davis’ comments about the budget and BPL’s rate reduction bond, said he wished to address another matter as the senator “does not understanding budgeting” – a comment he later withdrew.

The remark drew strong rebuke from Coleby-Davis and Mitchell, who rose to their feet.

“Come on now,” she said. “Don’t start with that foolishness. Don’t try to be insulting. If you have a question or comment, make it to me. No one insults anyone on your side. I expect an apology from that comment. That’s what I expect.”

Mitchell shot to his feet. “What? Young lady? What is this?

Although Bethel withdrew the remark, Mitchell accused the attorney general of being sexist.

During his contribution later on, Mitchell again acknowledged the early spat and the request from the chair to strike the comments from the record. He said the Coleby-Davis’ comment was fair.

Reading a January 27, 2018, article in The Nassau Guardian, Mitchell said the then rise in unemployment from 9.9 percent to 10.1 percent nationally was largely attributed to a more than six percent reduction in jobs in the public service, according to the Department of Statistics.

In the article, Turnquest was quoted as saying the unemployment survey was expected to reflect some increase in joblessness in The Bahamas, but attributed the reduction to “bogus” jobs engaged by the former administration.

On a point of order, Minister of Labour Dion Foulkes, who said he previously addressed the public service decline, stressed it had nothing to do with the Minnis administration terminating public servants as suggested by the PLP.

“It had to do with retirements, resignations and deaths,” Foulkes said.

“That is what caused the reduction in the civil service, and the FNM not filling those posts because our job was to get the civil service down to a size without letting anybody go. And the way to do that is if people retire, you just don’t bring somebody in to keep it up at a high number — nation attrition. That is the point.”

However, Mitchell insisted contract workers of Urban Renewal nor did Gaming Board workers retire, prompting Foulkes to retort “their contracts expired”.

Foulkes said the FNM did not terminate “any contract before the time in the contract that calls for its expiration.”

Mitchell responded: “Attrition, expiry of the contract, whatever it is — the public service reduced under the Free National Movement and the minister said, the government expected the next unemployment survey to reflect some increase in joblessness, but attributed this reduction to the ‘bogus’ jobs engaged by the former administration and senator (Coleby-Davis) made a fair comment based on these things in the public domain. That’s the point.”

Presumably when people die or retire it might be considered as though they have been let go.
Interesting logic Miss Coleby-Davis.