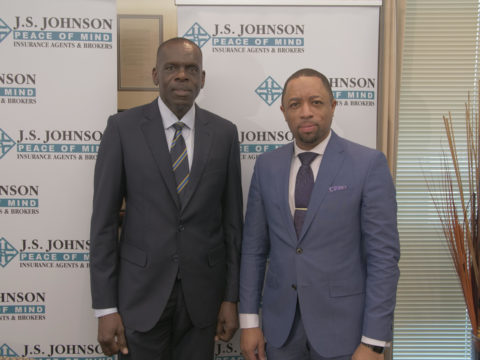 From left: Charles Johnson representing J.S. Johnson Insurance Agents and Brokers along with Newry, Host of A Familiar Walk.

With the daunting news of an active 2018 hurricane season looming over a still healing Caribbean, A Familiar Walk’s annual hurricane preparedness program is reminding people of the importance of being prepared for an active Atlantic hurricane season, one possibly fraught with strong storms.

Lingering thoughts of the 2017 hurricane season – the single most active season since 2007 – means the programme, which will air Wednesday, June 27, at 8:00 p.m. on ZNS TV 13, will be extremely important for the citizens of The Bahamas.

During the event, the panel discussed the importance of hurricane preparedness for 2018 and the lessons learned after the devastating 2017 hurricane season, which saw the devastation of Ragged Island.

The programme begins with a welcome segment and A Peace of Mind Segment with Charles Johnson.

Johnson said that it is J.S. Johnson’s privilege to welcome the panel annually for this most important and timely topic.  He then explained the importance of being prepared from the insurance industry’s perspective.

The insurance sector portion of the interview centers around nuggets of information for home owners, business owners, churches and the general theme of being prepared for this hurricane season.  Johnson spoke of networking with branches of J.S. Johnson Insurance Agents and Brokers throughout The Bahamas and their willingness to assist the Bahamian public if threatened by another natural disaster.

Capt. Russell explained the importance of hurricane and disaster preparedness from all levels of society; churches, schools, constituency offices, business, youth organizations and government ministries. He said that with this united front, “we will be able to truly get the message out of the importance of not only being prepared, but to think of this preparedness as a year-round event”.

He then gave an overview of the assortment of emergency relief equipment supplied by the United States of America, and how pleased his agency was with their generous donation.

Russell then recalled the largest evacuation in the history of The Bahamas and told of how thousands of people were in the path of Hurricane Irma last year. He said Prime Minister Dr. Hubert Minnis’ order for a mandatory evacuation of six islands in the southern part of the archipelago was important, as The Bahamas prepared for the worst.  Russell said the evacuation and the insights garnered from last year’s hurricane Season has prepared  Bahamians for 2018.

Turnquest said the Bahamas Red Cross helps the country’s Social Services department to respond to the needs of communities affected by natural disasters and reported on the Red Cross’ assistance with Irma affected islands.

Neilly said many may be wondering if early season development translates into an active Atlantic Hurricane Season, but encouraged all not to reflect on how many storms are predicted this year.

He gave an in-depth study of last year hurricane season and guidelines on how to prepare for a worst case scenario if threatened by a hurricane.

He also explained how technology has advanced and assists the Department of Meteorology’s predictions, which can save lives.

Newry, the host of A Familiar Walk, thanked his special guest’s and sponsors and said that simple actions such as developing a family plan, being prepared and keeping updated with all weather-related announcements will save lives – not just for a hurricane, but for any type of disaster that might occur.  He also thanked his production team of King of Hearts Media, Charles Russell, Kayla Nixon, Terry Colebrooke and the team at the Broadcasting Corporation of The Bahamas, for their assistance in making this production possible.