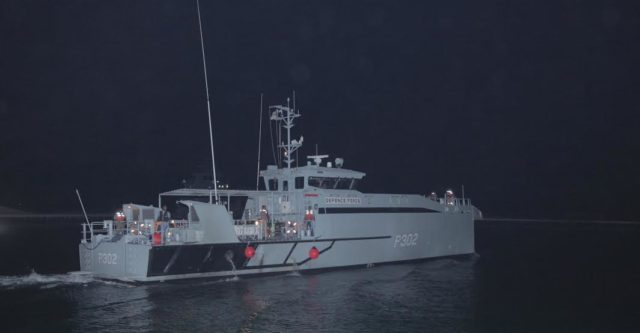 The HMBS Cascarilla, which apprehended the Haitian migrants near Eleuthera Wednesday.

Just 24 hours after they were apprehended off the coast of Eleuthera Wednesday, 89 Haitian migrants were charged before the Eleuthera courts with violation of the Immigration Act, according to a press statement by the Royal Bahamas Defence Force (RBDF).

The 64 males, 14 females and 11 children were charged with illegal landing. RBDF reports say all the migrants pleaded guilty, sentenced to conditional deportation and deported Thursday at 3:00 p.m. via Bahamasair jet services.

The statement said two other Haitians were also brought before the Eleuthera courts and charged after being discovered by defense force marines in a 30-foot cabin cruiser off Half Moon Cay near San Salvador.

One did not have proper documentation and was charged illegal landing. He was sentenced to 15 months in prison and will be deferred to the Department of Immigration for deportation afterward.

The other, who possessed a spousal permit, was charged with harboring an illegal person. He was sentenced to one year in prison and a $3000 fine. His vessel was also seized.