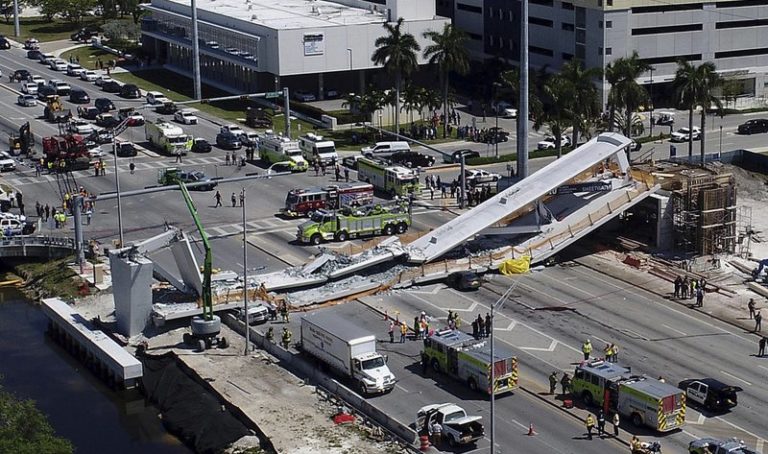 This photo provided by DroneBase shows the collapsed pedestrian bridge at Florida International University in the Miami area on Thursday, March 15, 2018. (DroneBase via AP)

At least four students from Florida International University (FIU) are dead, following the collapse of the pedestrian bridge across Southwest Eighth Street in Miami-Dade Thursday. Another nine were taken to nearby hospitals according to the Associated Press.

According to Deputy Council General Sandra Carey of The Bahamas Consulate’s Miami Office, it is too early to determine the nationality of those victims.

While the Consulate has a registry of all Bahamian students at the university, Carey told Eyewitness News, that the situation remained fluid and that they would work to make contact with the more than 75 Bahamian students registered there.

University officials used FIU’s website to warn persons from entering the area, which remained a chaotic scene up to publishing. Slabs of concrete crushed a number of vehicles, with many feared trapped inside.

A post on the school’s official Facebook page read: “We are shocked and saddened about the tragic events unfolding at the FIU-Sweetwater pedestrian bridge. At this time, we are still involved in rescue efforts and gathering information. We are working closely with authorities and first responders on the scene.”

University President Mark Rosenberg also sent his condolences to all families that involved in the tragedy.

He wrote, “I am heartbroken at the news of the collapse of the pedestrian bridge on 8th Street and the resulting devastation. We send our deepest condolences to the victims and their families.”

For Bahamians students Ashkell Davis and Bianca Kelly, a major concern among community officials is the “accelerated construction methods” used to construct the bridge.

Whatsapp chat group for Bahamian students at the university and all participants are accounted for and okay.

While the young women were not near the school campus at the time of the incident, they said they have not heard any official word that any Bahamian students were involved.